The factors responsible for the near extinction of the California condor have been debated since the 19th century. Today, the factor considered the greatest threat to condors is the use of lead ammunition by hunters. Condors may be poisoned by lead when they consume “gut piles”, the entrails of deer and other game left behind by hunters.

Among the many other threats to condors that have been reported through the years are the poisons employed to kill agricultural pests and the shooting of condors for their feathers. This has led to defensiveness by trade organizations associated with these activities.

In 1986, the newsletter of the National Animal Damage Control Association included a brief item about the California condor and whooping crane titled “We didn’t do it!!!” (the 3 exclamation points are in the original). The paragraph concerning condors reported on the small number of surviving condors and concluded with:

The last few known deaths of condors have been attributable to lead poisoning – not ADC activities.

ADC refers to animal damage control. The underlining is in the original.

The National Animal Damage Control Association had reason to be defensive. A. J. Krynitsky and colleagues provided evidence that a California condor found dead in 1983 was likely killed by cyanide intended for livestock predators. At the time there were only about 20 condors alive on Earth (the exact number was not known).

In 1911, The Millinery Trade Review included a brief item defending hat makers against claims that they were responsible for condor deaths. The item first quoted a sign posted on the cage of 2 California condors at the “Zoological Gardens in Bronx Park, New York”:

California Condor from the Coast Range of California. Largest and rarest of great American birds. It has become almost extinct from eating poisoned meat intended to kill wolves and pumas.

The Audubon Society will please take notice that the millinery trade is not responsible for the extinction of this bird, notwithstanding the fact that a few condor quills have been used in trimming women’s hats.

Yes, condor feathers were once a feature of commercially-made hats. For example, a 1905 newspaper article reporting on the latest fashion in Easter hats noted that:

Floral adornments must give way to plumage, such as pheasant, condor or white peacock.

A 1917 article in The Millinery Trade Review included images of what are claimed to be condor feathers in 3 colors, “négre brown, sand and dahlia”: 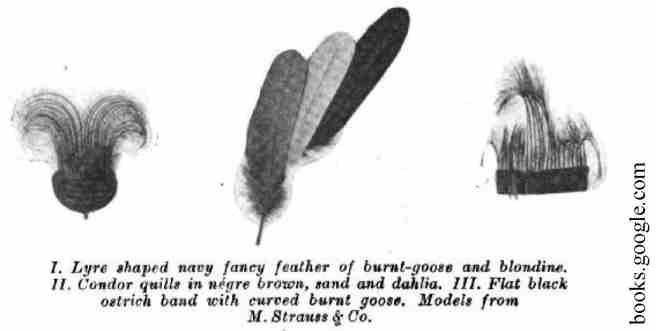 There was even a line of “Condor Hats” sold by a milliner in London, although no mention was made in the newspaper advertisement promoting these hats about whether they were actually decorated with condor feathers.

I have yet to find evidence that the condor feathers employed by hat makers were from California, rather than Andean, condors. The latter have long been more numerous than the former and so would seem a more likely source. A recent report in Vulture News describes how the feathers of Andean condors are being sold (illegally) in Peru.

The 2 examples considered here demonstrate that there is a history of industries being concerned about claims that their activities are detrimental to the California condor. At least for the California condor, killing the birds for their feathers is no longer a significant concern.

Krynitsky, A J, and others. Analysis of cyanide in whole blood of dosed cathartids. Environmental Toxicology and Chemistry. September 1986.