Here I present and briefly consider 2 poems about the California condor.

A 1906 issue of the magazine Birds and Nature includes “The California Vulture”, an article that begins with a poem. At the time, the California condor was often referred to as the California vulture. The poem has neither an author or title:

The poem and article were accompanied by what appears to be a colorized photograph of a mounted specimen of the California condor:

George Sterling’s “The Black Vulture” was first published in 1911:

In the first poem, the spelling plane in the fourth from the last line is as in the original. So the poet was flying too, and just 3 years after the Wright Brothers’ first flight. I find it odd that a poet would describe the condor’s flight as “bat-like”. The flight of condors is so stable that it leads many to mistake them for airplanes. This could hardly be more different than the flapping, twisting, and turning flight of bats. However, many have described, as the poem does, the condor’s ability to be a far-off speck one moment and almost within reach the next. 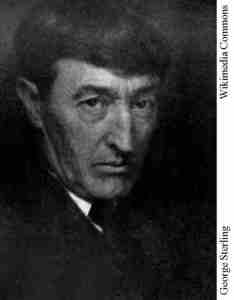 In his poem, Sterling places the California condor alone atop the sky, above even the eagle and falcon. His condor is “serene” but has “relentless eyes” that survey all below. However, the bird is not yet aware, now 8 years after the Wright Brothers’ first flight, that humans are seeking to conquer the condor’s sky. Of course, in the century since the publication of Sterling’s poem, humans have conquered more of the condor’s habitat than just its sky.

Sterling, George. The black vulture. In The house of orchids and other poems. Robertson. 1911.