The Cooper Ornithological Club was founded in 1893, taking its name from ornithologist J. G. Cooper. In his history of the organization’s early years, Harry Swarth makes clear that the club’s focus was the birds of California.

The organization has published its own journal regularly since January 1899. Beginning with the January 1900 issue, the journal’s name became The Condor.

An image of the California condor was featured on the cover of most of the club’s publications from the beginning. Even as the Cooper Ornithological Club became the Cooper Ornithological Society and the organization’s focus broadened to include more than just California’s birds, an image of the condor has continued to grace the cover of most of the society’s publications.

However, the view of the condor portrayed on these publication covers — from 1899 to the present — has changed. As discussed below, this change parallels the evolution of ornithology as a science.

First though, in chronological order, here are images of the cover art.

W. Otto Emerson provided the illustration for the first volume of the club’s journal:

Emerson contributed a new illustration for the following year:

For the next year, the bird image remained the same but a more formal font was chosen for the journal’s title:

At the start of the journal’s 4th year of publication an entirely new design was provided by Walter K. Fisher: 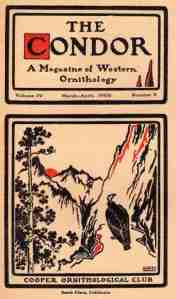 Starting in 1924, Fisher gave his roosting bird a chance to see what was in the other direction and provided a companion, seen in flight:

J. Laurence Murray created the art for a new cover in 1947: 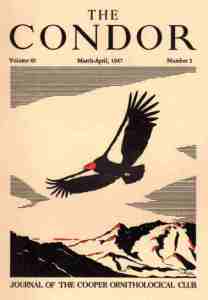 Forty years later the cover art was simplified and the soaring bird pointed in the opposite direction. No artist was credited in the editorial announcing this new masthead:

N. John Schmitt provided art work for the masthead that first appeared in 1999. At this point, all California condors living in the wild carried wing tags. But no wing tag is visible in Schmitt’s image:

For many years, the Cooper Ornithological Club/Society published monographs under the title Pacific Coast Avifauna. The image below first appeared on the 1912 issue but no artist was credited:

The condor image on the cover of Pacific Coast Avifauna changed in the early 1950s:

The series Pacific Coast Avifauna is no longer published. The issues of a new series published by the Cooper Ornithological Society, Studies in Avian Biology, generally have cover art that is related to each issue’s topic. But the cover of issue 15, from 1994, features the same image found on The Condor from 1947-1986:

Over the course of a century there were many changes in how the California condor was portrayed on publications of the Cooper Ornithological Club/Society. But there is a clear trend in these changes.

For the first 47 years of The Condor, the cover was graced by a roosting bird (with the addition of a distant flying bird about half way through that stretch of time). Starting in 1912, Pacific Coast Avifauna showed a bird just leaving its perch and taking flight, as if it was just disturbed by an approaching ornithologist. Since 1947, the bird on the cover of The Condor has soared and, beginning in the early 1950s, that’s also been the case for Pacific Coast Avifauna.

Why this trend in how the California condor has been portrayed? At the beginning of the science of ornithology, the scientists’ primary tool was a gun and dead birds were the object of their studies, studies that centered on the physical form of birds. In many cases, early ornithologists studying birds never saw their subjects alive. For example, James John Audubon’s 1838 painting of the California condor was based on a dead specimen. In his excellent book about Audubon’s work, Lee Vedder notes that Audubon never traveled west of the Rocky Mountains and is thought to have made his condor painting while in London. A dead bird, packed in a box for months, is most readily imagined as a live bird in a perching posture. Hence, images of condors from the 19th century and, on Cooper Ornithological Club/Society publications, into the mid-20th century, typically showed roosting birds.

Lighter weight spotting scopes and binoculars, cameras capable of capturing images of birds in flight, and a shift toward research concerned with birds both alive and in the wild all came later in the history of ornithology. Accordingly, birds were more likely to be observed and thought of as flying.

Vedder, Lee A. John James Audubon and the Birds of America: a visionary achievement in ornithological illustration. Huntington Library. 2006.