Beginning in the 1950s and continuing into the 1980s there was much controversy over what humans should or should not do about the California condor. Similar arguments about other endangered species persist and this, in part, explains why the now decades-old condor controversy continues to draw attention.

In this post I consider whether Charles Dickens can help us to better understand the “condor debate” and the current variants of this debate that involve other species.

In essence, the condor controversy was this: Some argued that California condor habitat should be stringently protected from humans and the birds left alone there. Others agreed on the need for habitat protection but also wanted intensive management of the birds, including placing radio transmitters on them so they could be tracked and breeding birds in captivity for release into the wild.

That short summary of 3 decades of debate is, of course, a simplification. But there was nothing simple about the legal actions and campaigns by various groups involved in the debate. Here is one small example, a protest at the Los Angeles Zoo, where condors were housed for captive breeding:

Condors
Do it better
in the wild!
Boycott LA Zoo

Along with the differing views about intensive management of the birds, there was another difference between the 2 sides. For advocates of intensive condor management, letting the species go extinct was just not acceptable. But some of those opposed to the management were open to the possibility that the California condor might soon go extinct. And some embraced that possibility.

That last is a strong statement so I will offer evidence to support it.

And what if nothing can bring the birds back? What if Gymnogyps [the California condor], watching Los Angeles sprawl toward its last hills, has simply decided it is time to go?… If it is time for the condor to follow Teratornis [an extinct relative of the condor], it should go out unburdened by radio transmitters.

Departing, the condor might do us a final service, in the manner of mineshaft canaries. They might open our eyes. When the vultures watching your civilization begin dropping dead from their snags, it is time to pause and wonder.

William Conway, a proponent of captive breeding in general, summarized the situation in this way:

… the technology of captive care and intensive management are eschewed as a desecration by so many who love birds, that a “rather dead than bred” philosophy has attracted some very deeply caring adherents.

Condor biologists Noel and Helen Snyder, major participants in the condor controversy on the side of intensive management, observed that:

To some members of the FOE [Friends of the Earth] alliance, the concept of captive breeding condors was apparently so repugnant and divergent from their image of the condor as the essence of wilderness, that they proclaimed their preference for “death with dignity” for the species, should captive breeding be its only salvation.

“Rather dead than bred” and “death with dignity” are the words management proponents used to describe the their opponents. But some opponents used similar language.

J. Richard Hilton, so passionate about condors that he published a newsletter called The California Condor during the late 1960s and early 1970s, wrote:

When the condor’s last day comes, better she be extinct than caged, displayed, and exploited by men, whose kind before slaughtered her to oblivion.

(This quotation was taken from David Zimmerman’s book To Save a Bird in Peril.)

An article in The Progressive magazine by Sierra Club activist Robert Leonard Reid was subtitled “Better a vanished species than a proud bird caged”. This is how Reid explained his willingness to accept extinction:

If condors are not bred in captivity, it may come to pass at some time in the foreseeable future that the last wild condor will die. This potential consequence of our choosing not to capture condors should be stated unequivocally and understood fully.

If that happens, it will be for us a tragedy of immeasurable proportions. But it won’t be a tragedy for condors. Condors will have lost nothing that they ever coveted. It is we who will come up short, for we will have lost two things that we covet very much: confidence in our ability to manage the affairs of the world, and condors. Troubling as those losses may be to contemplate, we should recognize that we are to blame for bringing them dangerously close to realization. For us now to involve condors in what is nothing more than a face-saving scheme will only increase our culpability.

As I tried to better understand the mind set of those who saw extinction as an acceptable, if not preferable, outcome for the condor, I happened across an article about Charles Dickens’ reaction to the great ruins of Rome. This led me to Dickens’ travel diary:

On January 14, 1844, Dickens first saw the Coliseum in Rome and made this diary entry:

It is no fiction, but plain, sober, honest Truth, to say: so suggestive and distinct is it at this hour: that, for a moment – actually in passing in – they who will, may have the whole great pile before them, as it used to be, with thousands of eager faces staring down into the arena, and such a whirl of strife, and blood, and dust going on there, as no language can describe. Its solitude, its awful beauty, and its utter desolation, strike upon the stranger the next moment, like a softened sorrow …. 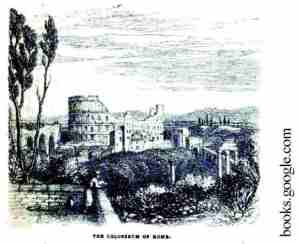 But while Dickens has no difficulty imagining the newly-built Roman Coliseum bursting with activity, this was not what truly moved him:

Never, in its bloodiest prime, can the sight of the gigantic Coliseum, full and running over with the lustiest life, have moved one heart, as it must move all who look upon it now, a ruin. God be thanked: a ruin!

Given the choice between visiting some ancient ruin today or traveling back in time to see that structure in its prime, I expect many would choose the latter. But not Dickens.

In the years before intensive management of the California condor began, did some consider this endangered species to be a kind of ruin? Here was a species that had survived and thrived for millennia but was, right before our eyes, going extinct. Dickens was clearly enchanted by the ruins of the Coliseum. Do species in the throes of extinction offer some people a similar kind of enchantment?

I do not mean to diminish the serious arguments that were made that the best response to the decline of the California condor was to protect its habitat and not interfere with the birds. But I can’t help thinking that there may have been more on the minds of those who wanted to leave condors alone than just suspicion of management and research, or a belief that nature always knows best. Given the high likelihood of the condor’s extinction no matter what was or wasn’t done, perhaps the reluctance to directly intervene on behalf of the condor was driven in part by a fascination with seeing a species in ruin and a disinclination to see the restoration of that ruin.

Perhaps Brower, Hilton, Reid, and the others who were open to the condor’s extinction would have shared Dickens view about ruins: better to let them be.

I will give the last word here to ornithologist Rich Stallcup. He wrote passionately about his opposition to captive breeding and attaching radio transmitters to condors:

Must we burden and demean the doomed skymasters with electronic trinkets, then imprison them in boxes and demand that they reproduce? Or can we just say “Yes, el condor, we blew it long ago, we’re sorry. Fly, stay as long as you can, and then die with the dignity that has always been yours.”

Make the few wild condors as safe and comfortable as possible by diligently protecting their remaining range. Enjoy them, love them, grieve for them … but do not touch them.

In a 28 February 2019 essay in the New York Times, Margaret Renkl asks “why so many people are fascinated by eagles”. Among her answers is this:

It’s because we almost lost them, but we learned our lesson just in time. Before it was too late.

In On Extinction: How We Became Estranged from Nature (Granta 2011), author Melanie Challenger writes:

… an ancient English word for the fascination experienced by someone looking at a ruin: dustsceawung.

(Please don’t ask me how to pronounce dustsceawung.)

Snyder, Noel, and Helen Snyder. The California condor: a saga of natural history and conservation. Academic. 2000.

Zimmerman, David R. To save a bird in peril. Coward, McCann and Geoghegan. 1975.