My interest in the question posed by this post’s title has to do with how people perceive California condors in comparison to other birds.

When I show an image of a condor to those who are not familiar with them, inevitably I hear reactions such as “gross”, “disgusting”, and “bizarre”. If I tell people that condors make their living eating carrion, these adverse reactions often grow stronger. Articles in newspapers and magazines from the 19th century to the present often describe condors in quite negative terms.

How can California condors possibly compete for favor with elegant swans, regal hawks, and beautifully-colored songbirds?

I thought of this when I stumbled across Ron Flynn’s guide to the values of original prints of the bird paintings of John James Audubon. During the early 1800s, Audubon created his Birds of America, a series of paintings that were printed and sold by subscription. Complete sets of these rare prints have sold for over $10 million. But individual prints are also sold on a regular basis.

Here then was one way for me to evaluate my idea that California condors might not be highly valued despite their exceptional size and rarity.

Most of the 435 Audubon prints show a single species of bird. For my comparison of the values of these prints, I am neglecting the exceptions, for example, separate prints of male and female wild turkeys and a print titled “A feathered pot-pourri”. I am also ignoring the reclassification of some species since Audubon’s time.

The bird names below are as named by Audubon. Names in parentheses that follow, if any, are the current names for the species (from Susanne Low’s A Guide to Audubon’s Birds of America).

In Flynn’s guide, the highest value is $150,000 for the print of the American flamingo (greater flamingo): 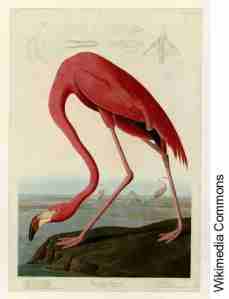 The lowest value is a mere 1% of the maximum, $1,500 for the Manks shearwater (Manx shearwater): 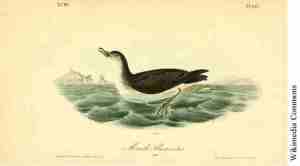 The average value of the 435 prints is just over $11,000. But that average was influenced by a few exceptionally high values. The median value of the prints is $4,500 (in other words, half of the prints had values greater than and half had values less than this amount). Prints with values of $4,500 include the loggerhead shrike, long-legged avocet (black-necked stilt), and sharp-shinned hawk.

The Californian vulture (California condor) is valued at $14,500: 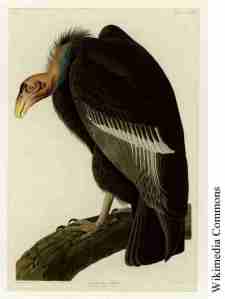 That $14,500 is more than 3 times the average and at the 84th percentile (in other words, 84% of the prints had lower values). So my idea that the condor might be considered less valuable than other species, at least as measured by the value of Audubon’s prints, was not correct.

However, as a condor enthusiast, I still cannot help but notice that the condor’s value is less than 10% that of the greater flamingo. Many other prints also have values greater than that of the condor, including:

game birds such as ducks and grouse

wading birds such as herons, ibis, and cranes

raptors such as the fish hawk (osprey) and owls

To dig deeper, I checked on the values for the condor’s 2 closest relatives in North America. The turkey buzzard (turkey vulture) is valued at $7,200:

These above-the-median vulture values further indicate that there is less anti-vulture sentiment than I had expected. Perhaps the “gruesome factor” even adds value, considering that the print of the black vulture is as much about the dead deer’s head as it is about the two birds.

All this is not to suggest that Audubon print values are determined solely by the species of bird depicted. How the bird is portrayed, the background, and other factors surely have a substantial influence on print value. And, of course, the values of one artist’s prints does not provide more than a tiny part of the answer to my initial question about the “worth” of different bird species.

Low, Susanne M. A guide to Audubon’s Birds of America. Heald and Reese. 2002.