We now know that California condors can be bred in captivity. But humans gained this knowledge only in 1988 with the hatching of Molloko at the San Diego Wild Animal Park. This chick was the first California condor to be hatched from an egg produced by 2 captive parents.

Years of research had preceded Molloko’s hatching. But long before this successful research program began, there was an unsuccessful effort to breed California condors at the National Zoo in Washington DC.

News photographs from 1926 tell part of the story. Below are images of a photo and then the caption pasted on its back:

The day after the above was published, Wide World distributed this photo and caption: 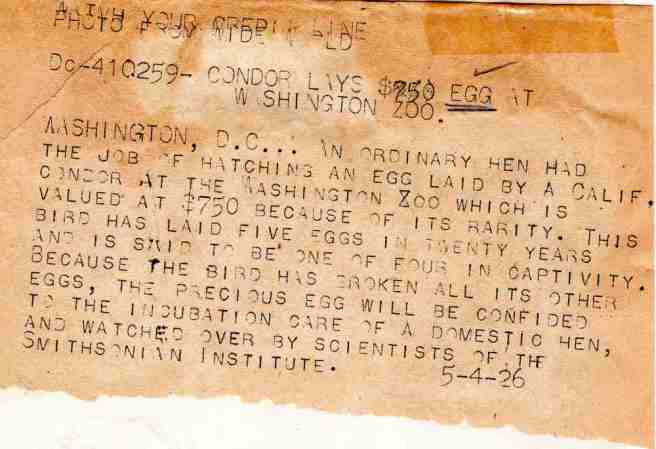 It is hard to imagine that a chicken was up to the task of incubating a California condor egg!

In 1924, a short article by Joseph Dixon in The Condor provided more details. Here is an excerpt:

The birds have “nested” three times, but one or more seasons have elapsed between nesting periods. In each case, the single egg was laid upon the bare wooden floor of a large shelter or roost which was placed well above the ground. In every instance the egg proved to be infertile. In the first two instances the Condors incubated the egg for several weeks. In the third case the freshly laid egg was taken out and artificially incubated, but again the embryo failed to develop.

The title of Dixon’s article, “California Condors Breed in Captivity”, was optimistic. It would be 60 years after Dixon’s report before condors bred successfully in captivity.