How was knowledge of natural history conveyed to children in the past? Books can provide insights into the nature of the “environmental education” available to our great- … -grandparents.

In this post I note 3 books for younger children. Only one of these refers specifically to the California condor. As is typical for the time, the other 2 refer to the “condor”, by which they mean the Andean condor. Even in the USA, the California condor was not as well known as the Andean condor a century ago. Nevertheless, I consider all 3 books here because they each take different approaches to conveying understanding to children.

Pictures and Stories of Animals for the Little Ones at Home is a 6-volume set of books published in 1868. The 150-page 2nd volume concerns birds. The section on the birds of prey begins with the vultures and the first vulture mentioned is …

… the great Vulture of California, the largest bird of prey in our country. It is black, with a red and orange colored head.

You can see by the picture that it has no feathers upon its head and neck; all vultures have the head and neck bare, and so they can keep themselves much cleaner while feeding than they could if these parts were covered with feathers.

This is followed by a more detailed account of the Andean condor, including where they nest, how high they can soar, and the like.

The author, listed on the book’s title page as “Mrs. Sanborn Tenney” is identified elsewhere as Abby A. Tenney. In her preface she acknowledges the Manual of Zoölogy, a book published in 1866 by Sanborn Tenney, “Professor of Natural History in Vassar Female College”. 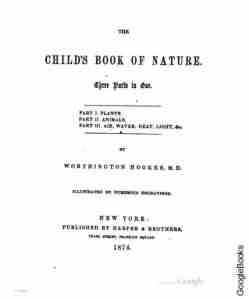 The Child’s Book of Nature for the Use of Families and Schools is subtitled Intended to Aid Mothers and Teachers in Training Children in the Observation of Nature. The 3-part book was published in 1875.

This book, by a medical doctor, is organized in terms of anatomy and physiology, rather than kinds of organisms. Chapter titles include the expected: “The Stomach and the Teeth”, “Seeing”, and “The Hand”. But there are also chapters with more inviting titles: “What Animals Use for Hands”, “The Variety of Machinery in Animals”, and “What Sleep is for”.

The chapter titled “Wings” shows an Andean condor with this text:

Here is a very large bird, the condor. To lift such a heavy body as he has up into the air must require very large wings, and you can see that he has them.

Now, to work such broad wings, the bird has very stout muscles. You know how the breast of a bird stands out. You see it here in the condor. This is because the muscles with which it works its wings are there. You can see that this is the reason when a bird is cooked. The meat, you know, is very thick on the breast-bone – thicker than in any other part of the body. If we had as large muscles on our breast-bones we should look very strangely. But we do not need such large muscles to work our arms as birds do to work their wings.

This is much richer stuff than basic descriptions of a bird’s appearance or behavior.

From 1906, Beasts Shown to the Children, offers natural history in the form of stories accompanied by illustrations. Here is the first part of the chapter titled “Condor and King Vulture”:

The Condor and the King Vulture heard that their pictures would be put into this book but that they were not to be allowed to speak. You see they are not nice birds, and I was afraid they would talk about unpleasant things.

Vultures are carnivorous or flesh-eating, but they do not hunt and kill their prey like their cousins the Eagles and the Falcons. Instead, they eat carrion, that is to say they eat the flesh of dead animals. Now you will understand why I did not want the Vultures to speak, for beast and birds talk chiefly about their food, and the ways they have of finding it.

“But,” said the Condor, that big Vulture with the white ruff round his neck, “you must not make the children dislike us altogether, for we are useful birds.” Here he looked so sad that I answered, “You may tell your use,” and he at once began.

“All Vultures are scavengers. In the hot countries where we live, if an animal dies its flesh becomes very quickly bad, and if we did not come at once and eat up the carrion, the air would be so unhealthy that people could not live.”

This is another vivid and worthwhile presentation of what birds are about.

Except for some of the phrasing (and other quirks not considered here), the text of these books would not seem out of place in a home or school library today. The lessons these books offer about life and its environment are similar to what can be found in recently-published books. While each of the 3 books has something valuable to offer, I was delighted and impressed by the latter 2. Undoubtedly, there are other old children’s books about the California condor — and environmental science — that deserve our attention.

Tenney, Abby A. pictures and stories of animals for the little ones at home. Sheldon. 1868.

Tenney, Sanborn. Natural history: a manual of zoölogy for schools, colleges, and the general reader. Scribner. 1866.

Hooker, Worthington. The child’s book of nature for the use of families and schools. Harper. 1875.