The California condor has appeared on the cover of many magazines in recent decades. In this post I share 10 fine examples.

The February 1978 cover of Birding featured this oft-reprinted photo by John Borneman, here in black and white: 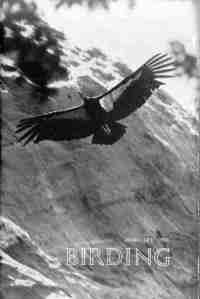 The New Scientist cover for 16 October 1986 included a provocative headline over a photo by Jeff Foote and Bruce Coleman:

Inside the June 1987 issue of WildBird is the caption for the cover image. The caption reads, in part:

The rarest of sights …. At the time of writing, only one condor remained free.

The cover photo for this issue is by David Clendenen: 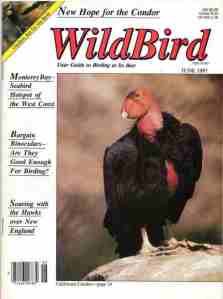 The April-June 1990 cover of Birds International shows a photo taken by Noel Snyder on the summit of Mount Pinos (elevation 8847 feet / 2697 m):

A photo taken at the Los Angeles Zoo by Anthony Mercieca graced the December 1991 cover of Birder’s World:

The April 1992 issue of the magazine of the San Diego Zoo, Zoonooz, celebrated the release of California condors back into the wild. This photo of condor AC-9 was taken in November 1986 by David Clendenen:

In Spring 1997, the magazine of the Los Angeles Zoo, Zooview, also featured AC-9, here in a photo by Mike Wallace:

The cover of the Fall 1999 issue of Hawk Mountain News did not include a photographer credit: 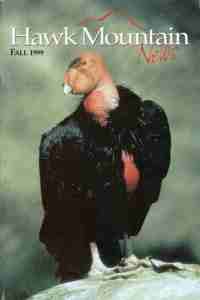 This beautiful photo by Susan Middleton and David Liittschwager appeared on the January-February 2000 cover of Audubon:

Finally, offering a reminder of the expanding range of the California condor, here is a photo by Chris Parish on the cover of the September-October 2011 issue of Arizona Wildlife Views:

My other posts with photos of the California condor include Close-up news photos 1935-1980 and Photogenic & newsworthy eggs & chicks.