With summer winding down and the academic year about to begin, it seems an appropriate time to consider the essential books about the California condor.

I have limited my choices here to works that are focused on the California condor and intended for adult readers. I included any format that is thick enough to stand on a bookshelf.

The 17 books include those for general readers and technical readers. Among the authors are several of the authorities on the California condor.

The publication dates range from 1953 to 2013. Half were published since 2000, indicating the acceleration of interest in the California condor. The older books are still very much deserving of attention.

A notable feature of nearly all these books is their interdisciplinary character. There is plenty of ornithology and ecology here, but also history, politics, ethics, and other matters. All of these books share a strong sense of appreciation for the wonder that is the California condor.

The books are listed below in order of publication date. The bibliographic details provided are for the original edition of each. The images shown, of either the title page or cover, are from the editions in my library, some of which are paperbacks or reprints.

Caras, Roger A. Source of the thunder: the biography of a California condor. Little, Brown. 1970.

Darlington, David In condor country: a portrait of a landscape, its denizens, and its defenders. Houghton Mifflin. 1987.

Snyder, Noel, and Helen Snyder. The California condor: a saga of natural history and conservation. Academic. 2000.

Wilbur, Sanford R. Condor tales: what I learned in twelve years with the big birds. Symbios. 2004.

Moir, John. Return of the condor: the race to save our largest bird from extinction. Lyons. 2006.

Nielsen, John. Condor: to the brink and back – the life and times of one giant bird. HarperCollins. 2006. 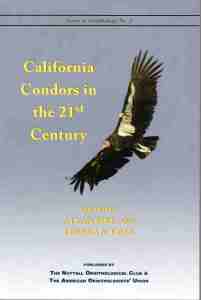 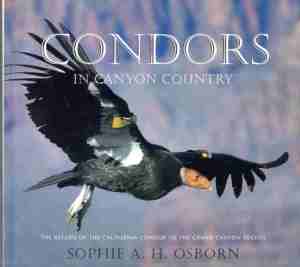 Osborn, Sophie A H. Condors in canyon country: the return of the California condor to the Grand Canyon region. Grand Canyon Association. 2007.

I am looking forward to the publication of the 18th essential book on the California condor.