To celebrate and raise funds for their work, non-profit organizations often commission the creation of art work to give to their contributors. In this post I note 7 examples of such promotional art that feature the California condor.

The same year, the National Wildlife Federation produced a medallion with what appears to be a California condor on one side:

This medallion is the size of a US silver dollar. I have not been able to learn the name of the artist who created the condor image.

The stamp at upper right, showing a golden eagle feeding on a carcass while a condor waits nearby, conveys a lesson in natural history: when golden eagles and condors both find a carcass, the golden eagle eats first.

It is not only conservation organizations that celebrate the California condor. The Heartland Coin Club produced a “giant penny” marking an anniversary of the club’s founding:

I appreciate the caption “returning to the wild”, a reminder that the condor’s recovery is an ongoing, not a completed, process. This coin is the size of a US silver dollar. 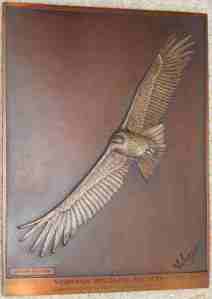 Finally, from the February 1987 issue of Zoonooz, the magazine of the San Diego Zoo, is an advertisement for a porcelain sculpture of a condor chick:

The order form accompanying this advertisement indicates that 30% of the purchase price was allocated to support condor recovery efforts at the zoo.

These small art works, created over a span of several decades, have and continue to raise awareness of and encourage participation in the efforts to save the endangered California condor.