Descriptions of the California condor have long included negative comments about their appearance. In this post I offer examples going back to the mid-20th century (in a future post I will go back farther in time).

Not even a fluffy, newly-hatched California condor chick could be spared the label “ugly”. A 1988 article in People magazine was titled “Meet Molloko – One Ugly Chick but Beautiful News for California’s Threatened Condors”. In a more recent article, Ellen Alperstein quotes others who found ugly alone to be insufficient, describing condors as “butt-ugly”.

Some have taken things well beyond ugly. In magazine articles, the condor has been characterized as “hideous” (Birder’s World), “repulsive” (Worldwide Challenge), and “grotesque” (Life). In the 1952 film Something for the Birds, a character takes it to the biblical level, saying that condors are “an abomination to the eye”.

Others have at least tried to be diplomatic. In 1979, Faith McNulty described the California condor as an “unbeautiful bird”. Brooks Atkinson and Henrietta Holland both went with “homely”. To describe a condor not in flight, Betsy Carpenter started with “Not a pretty sight” but then continued:

By any measure, a grounded condor is one of the uglier creatures in nature’s aviary.

In 1966, Faith McNulty gave her readers something to ponder when she described a mounted condor specimen at the Smithsonian as “majestically unattractive”.

Some authors have put a positive spin on “ugly”. In her novel Condor Moon, Tanna Thornburg wrote that a condor is “so ugly it’s cute” and Paul Illk’s poem “Condors” includes this couplet:

I haven’t seen another since—
+++++Could be we’ve lost our ugly prince.

The biologist Simon Watt has fully embraced the label “ugly” in the interest of conservation. 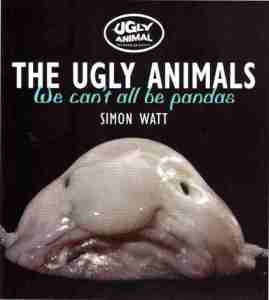 The Ugly Animals: We Can’t All Be Pandas is an information-rich catalog of animal species that don’t quite conform to modern aesthetic standards. Among them are the purple pig-nosed frog, Cook Strait giant weta, Pacific lamprey, bald-headed uakari, and California condor.

To learn more about Watt’s excellent project, get his book and visit the website of the Ugly Animal Preservation Society.

For another take on condor aesthetics, see my previous post Are some bird species worth more than others?