This post presents, in chronological order, 8 more black and white illustrations of the California condor from books in my library.

As published, this 1st illustration is little more than half the size of a business card. Yet it manages to nicely show a California condor up-close and in flight over its habitat:

This simple, evocative image marks the end of a book chapter:

Artist: Roger Tory Peterson. Book: Peterson, Roger Tory, and James Fisher. Wild America: the record of a 30,000 mile journey around the continent by a distinguished naturalist and his British colleague. Houghton Mifflin. 1955.

The next image imagines the capture of a California condor by members of the Lewis and Clark Expedition:

This illustration appears on a book’s front cover: 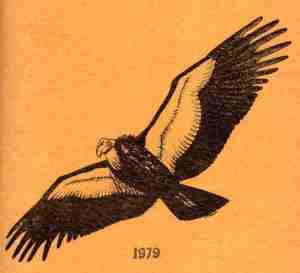 The distinctive pattern of condor wing feathers as they molt and are replaced is shown in this image:

The quiet dignity of the condor is nicely captured here: 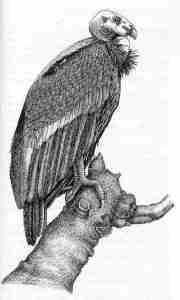 A captive condor dreams of soaring with another condor:

Finally, a fierce and brooding bird: