Here is another post featuring color illustrations of the California condor. These 8 artworks are from books in my library and are shown in chronological order.

The 1st illustration deserves some explanation. It comes from a book originally published in 1903 (the edition in my library is the second, from 1912). At this time a book printed in color was the exception rather than the rule.

The author states the book’s purpose in the preface:

Identification of the bird in the bush is its sole end; an end, however, which we trust will prove but the beginning of a new and potent interest in nature.

The author also explains the illustrations:

The illustrations in this volume are designed to aid the student in identifying birds in their haunts by giving, in color, those markings which most quickly catch the eye. They do not pretend to be perfect reproductions of every shade and tint of the plumage of the species they figure, but aim to present a bird’s characteristic colors as they appear when seen at a distance.

With that, here is the California condor:

The remaining images here speak very well for themselves. Source information follows each one. 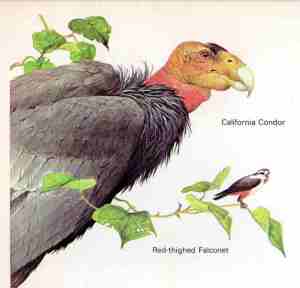 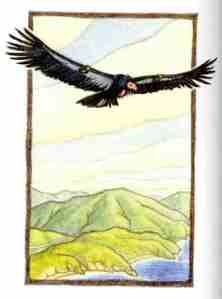 That last book, A California Bestiary, is a wonderful collection of art and essays about 12 notable species. This beautiful book is a worthwhile investment.

For more posts with California condor art, including color illustrations from books, click the ART&CRAFT button under POST TOPICS (somewhere on this screen – where depends on your device).