During a recent pass through my California condor bibliography, I happened to notice 5 items authored by different women in each of the years 1900–1904. In this post I note the important contributions these 5 women made to the human-California condor saga.

In the 1st issue of The Condor, Catharine Millikan published an account of the capture of a California condor. One of the 2 men involved was Jesse Millikan, presumably an ancestor of the author. The other man had happened upon a condor that was “asleep”, threw a shovel at it, and broke the bird’s wing. Together the men captured the bird, took it home, and chained it by the leg. Catherine Millikan describes how the bird later escaped, was recaptured, and then escaped again.

Millikan provides a clear, if painful, account of how humans have sometimes treated condors, especially in the past.

Mollie Bryan published 4 articles in the The Condor, one of which noted the California condor. Here are the 1st paragraphs from “A Study of the Birds of Santiago Canyon” [part 1]:

In a nook in Santiago Canyon, where foothills and mountains meet, nestling among the live oak trees is a little home, the ranch of Mr. J. E. Pleasants, where two bird lovers dwell, and where other bird lovers delight to come. Here may be found many of the birds of both mountain and plain.

In days past the Bald Eagle was a common visitant, and the California Condor was almost as plentiful as the Turkey Vulture is now. Many eagles have been killed by those who kept goats, but why the condor has departed, no one can tell. None have been seen here for twelve years or more.

The official minutes of the Southern Division of the Cooper Ornithological Club for January 1901 note that “Miss Mollie Bryan” was appointed to the club’s Life History Committee (these minutes were published in the March-April 1901 issue of The Condor). I did not find any mention of Bryan in Harry Swarth’s history of the club.

In 1902, Florence Merriam Bailey published her Handbook of Birds of the Western United States. Here is the conclusion of the section concerning the California condor:

The condor is certainly one of the glories of the splendid state of California, and every patriotic naturalist should do his part to enforce the law for its protection.

Bailey is an important figure in late 19th and early 20th century American ornithology. Her biographer, Harriet Kofalk, notes that Bailey was “one of the first to study live birds in the field” (as opposed to the standard practice at the time: shooting birds in the field and bringing them to the laboratory for study).

Bailey’s name appears again in my bibliography as coauthor of a “Report of the Committee on Bird Protection, 1937”. The paragraph devoted to the California condor begins:

The publication of newspaper items relative to expeditions to view California Condors in the mountain fastnesses of Ventura County, California, led to the writing of a letter to the Forest Service expressing fear that such publicity would mean further disturbance of the few remaining birds.

This paragraph goes on to report the Forest Service’s establishment of the Sisquoc Condor Sanctuary.

Bailey’s earlier publications are under the name Florence Merriam. 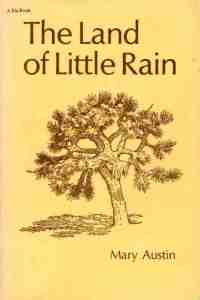 Mary Austin’s The Land of Little Rain, first published in 1903, is a classic of American nature writing. The book includes a chapter titled “The Scavengers” which refers to “buzzards” (turkey vultures) and “vultures” (California condors), the latter “distinguished by the white patches under the wings”. While Austin is troubled by the dining habits of these scavenging birds, she understands the role that they play in nature and has respect for the condor:

The vulture merits respect for his bigness and for his bandit airs, but he is a sombre bird, with none of the buzzard’s frank satisfaction in his offensiveness.

Irene Grosvenor Wheelock’s comprehensive Birds of California runs to nearly 600 pages. The entry for the California condor begins with the usual technical details:

But the text that follows is vivid, as demonstrated by this excerpt:

On his first trip to California, the Eastern bird-lover expects to see these birds soaring majestically over every mountain, and is disappointed when he has remained a year, or two, or three, with never a glimpse of one, although right in the Condor range. The truth is the Condors keep well back in the hidden and inaccessible parts of the mountains, and if you would see one, you must go where they are and see the sun rise, – as they do; for the Condor seeks his prey as soon as the sunlight has reached the valleys and before the world is fairly astir. Then you may see him on glorious wings, circling, circling, with scarcely a movement save of his head, which stretched out before him, turns this way and that. He is magnificent to look at ….

A review of Wheelock’s book in Bird-Lore, the predecessor to today’s Audubon magazine, concluded that

… no one who proposes to study the habits of birds in the West can afford to be without it.

Millikan, Bryan, Bailey, Austin, and Wheelock all left written records of considerable value to those who care about the California condor today.

Of course, many more women made and continue to make essential contributions to the human-California condor story. I look forward to presenting some of those contributions in future posts.

Bryan, Mollie. A study of the birds of Santiago Canyon [part 2]. Condor. July-August 1901.

Bryan, Mollie. The little widow: a true chapter in the life history of a pair of mockingbirds. Condor. July-August 1900.