What color is the California condor? 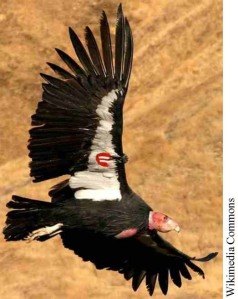 While adult California condors sport varying shades of yellow, orange, red, and purple, plus large patches of white, condors are commonly described as being “black”. Here are examples from 3 centuries of newspapers, magazines, and books.

In a letter to the editor of the Los Angeles Times, conservationist David Wilcove imagined the California condor as a

Big, black canary in a coal mine

Deborah Knight saw a group of condors in a cage as “hunched, black figures”. William Finley wrote that condors

But some authors take black to the next level when describing the California condor. Philip Fradkin wrote of “all that ferocious blackness”. Novelist Baxter Black had a character describe a particular condor:

“This one is as black as …” He started to say “a drug dealer’s heart”, but changed it to “the inside of a snake”.

Of course, many authors acknowledge that condors are not all black. A Time magazine article began

Their feathers are a funereal black

In a book for children, Patricia Fink Martin wrote

From the neck down, the condor has a coat of mostly coal black feathers

David Darlington referred to a condor as

But that last description puts me more in the mind of penguins and magpies than condors.

I especially appreciate John Kricher’s narrative of a close encounter with a condor in flight:

My brown eyes and her black eyes meet

William and Irene Finley applied black to the very bird itself. This is their description of a individual condor in flight:

High above in the eastern sky appeared a tiny speck of black, the size of a distant star

“Dark”, a descriptor related to black, is also regularly applied to the California condor. T. S. Van Dyke characterized an individual condor as a “great dark form” and Peter Matthiessen wrote that a pair of condors flying away from him became simply “dark silhouettes”.

In an earlier post, I noted examples of another descriptive term commonly applied to the California condor: Ugly.

The female appeared when standing upright, as perfectly black;… glossy brown black as the cat of the necromantic alchemist Dr. Wotumakollum – from the beak to the end of his tail-feathers he [sic] was in somber mourning.

(Perhaps someone can enlighten me about Dr. Wotumakollum.)

In the 19th century, there was confusion about what we now know is the all-black coloration of juvenile condors. Author Taylor, and many others, thought the juveniles were females.