This preliminary analysis is based on items published 1900-1999.  All of these items concern the California condor and included “condor” in the title. Duplicate items published in different editions of the Los Angeles Times were excluded.

While the number of published items increased during the 20th century, there were fluctuations from decade to decade: 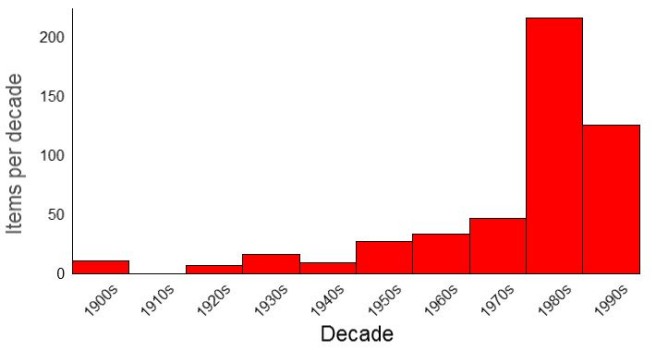 The overall increase can perhaps be explained, in part, by positive feedback. As items about the condor were published, this increased the public’s interest in the species, which, in turn, led to more newspaper coverage of the condor.

The decline in items during the 1910s and 1940s may be due to the world wars. The peak in the number of items during the 1980s is not surprising as that was the period when the controversy over condor management strategy was at its height, when all the condors were captured and brought into captivity, and when condors were first hatched and then bred in captivity.

There was also substantial variation in the number of published items within decades. Consider the 1980s:

In half of the years during the 1980s, the average publication rate was more than one item every other week.

Certainly one event that drew substantial attention was the capture of “the last wild condor” in 1987. The Los Angeles Times published this article 2 days later (21 April 1987): 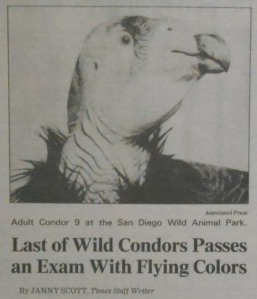 Despite this critical event, 1987 had the 2nd lowest number of published items during the 1980s.

In addition to the variation in the number of articles from year to year and decade to decade, there was also a seasonal cycle:

The above is based on all 100 years of data combined.

My preliminary explanations for the 3 peaks in the seasonal cycle are: (1) egg hatching during March-April, (2) fledging during August, and (3) censussing during October.

The large number of items about the California condor that were published in the Los Angeles Times reflects humans’ substantial interest in this remarkable species. But this is an interest that ebbs and flows through time.

For more on articles about the California condor from the Los Angeles Times, see the previous posts Journalists, Start with the numbers, and Population headlines.