Given that the extinction of the California condor was predicted in the 19th century, it is not surprising that there has long been talk of the last condor. How much talk?

I have found 61 published items with the words last and condor in the title that concern the California condor and that were published prior to the year 2000. When these items were published provides evidence of how concern about the condor’s future has changed over time.

Of the 61 publications, more than 1/4 were from a single year: 1987, the first year that all condors living on Earth were in captivity.

During the 1990s there were just 2 items, a substantial decrease from the 1980s and a sign of the hope for California condor’s survival. One of these 2 was distinct from the other 60 publications in that it carried the good news that captive breeding was happening:

How was last employed in the 61 publication titles? Several items were posed as a question, for example:

Last often referred to the California condor as a species or to individual birds. Modifiers paired with last included wild, free, known, female, and shy.

Last also referred to time, as in “Last days”, and place, as in “Last haunts”. The survival of the species was sometimes emphasized, as in “Last stand”, which accounted for 6 of the 61 items.

I was especially struck by the title words “Last flight”, which put the focus on the birds themselves.

“Last look” referred to the final opportunity for humans to see California condors.

English-language publications were not alone in applying last:

Articles from newspapers, magazines, and journals accounted for 60 of the 61 items. Those periodicals were a diverse set, including National Humane Review, Not Man Apart, Oryx, The Progressive, Sports Illustrated, and USA Today. The 61st item was a children’s book: 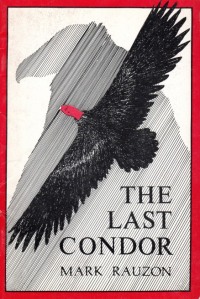 The frequent appearance of last in titles of publications about the California condor demonstrates humans’ concern for the species and indicates the degree of pessimism for its future. The sharp decline in titles with last from the 1980s to the 1990s is consistent with the increase in the number of California condors during this time. So let us hope that, when it comes to condors, last will remain a word of the past.