Beginning in the 1950s, those concerned about the California condor debated how best to prevent their extinction. Two main alternatives emerged: protect condor habitat and leave the birds alone, or intensively manage the condors, including breeding them in captivity. In the 1980s, the latter strategy won out and has demonstrated success. 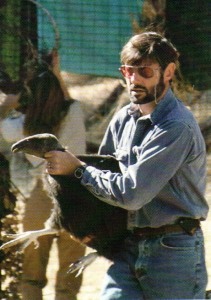 However, the survival of California condors continues to depend heavily on human intervention. For example, condors living in the wild regularly experience lead poisoning that requires a return to captivity for veterinary treatment. Condors are exposed to lead primarily by consuming carrion that contains fragments of hunters’ bullets.

“Endangered Birds and Epistemic Concerns: The California Condor” by Etienne Benson appeared in Endangerment, Biodiversity and Culture, edited by Fernando Vidal and Nélia Dias and published by Routledge in 2016. Benson is an historian of science, technology, and environment, and a member of the faculty of the University of Pennsylvania.

Benson’s chapter examines the different kinds of knowledge that humans have sought about the California condor through time. The author is especially concerned with how an awareness that the condor could become extinct influenced the kinds of research questions that were asked about the species. This awareness is referred to as the “endangerment sensibility”.

In this post I focus on the last two paragraphs of Benson’s essay, where the author pushes his analysis into new territory. He asks

Whether the endangerment sensibility should be seen as shadow or light – that is, as a help or a hindrance to the development of knowledge about the condor and the preservation of the species ….

The answer seems obvious. Surely, those studying a species are more likely to gather information that will be useful to insure a species’ survival if the researchers have an awareness that a species is endangered. Nevertheless, I agree with the author that the question is worth considering further.

I will let Benson’s words carry the matter forward:

[I]t is the human, rather than the condor, who has been seen as responsible for the condor’s fate…. the designation of the species as endangered appears both as an acknowledgment of human power and a recognition of human culpability.

However morally admirable that acknowledgment may be, it remains profoundly anthropocentric. Little room is left … for condors to innovate, experiment, or adapt to changing circumstances…. That condors clearly did fail to adapt to a landscape poisoned with lead shot and other novel threats … should not … be taken to mean that they do not have the capacity to do so in the future, with a little time and some human facilitation.

But viewing condors through the lens of endangerment does not encourage providing those opportunities or developing the kind of knowledge that would make them possible. On the contrary, the endangerment sensibility … seems inextricably tied to a vision of species as frozen in time and of conservation as an effort to insulate them against change.

Perhaps thinking of condors not as somehow essentially endangered but simply as in danger … would open up new possibilities for their flourishing over the long term.

As I understand this, Benson is arguing that by having a focus on the possibility of the condor’s extinction, scientists were inclined to think of the condor as a victim of humans rather than as an evolving species. The condor had survived past environmental changes and might be capable of adapting to current and future environmental changes – including those caused by modern humans – if only given the “space” to do so. And if humans deprive condors of the opportunity to evolve, then we are depriving them of a significant part of the essential nature, their essence.

This struck me as an echo of the earlier argument that condors would be most likely to avoid extinction if humans protected their habitat and left them alone. The difference here is the emphasis on leaving them be, with less concern for protecting their habitat. Taking Benson’s example, humans should not be concerned with reducing condors’ exposure to lead or providing veterinary treatment for lead poisoning. Instead, condors should be allowed to adapt to their lead-contaminated environment. 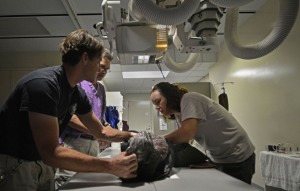 The scientist in me immediately considered the possibility of condors acquiring a tolerance to lead via natural selection. Some plant species are tolerant of lead in soil. A notable and relevant example is the plants that gradually began to grow on mining wastes that contain high concentrations of lead. Populations of turkey vultures are able to survive in the condor’s lead-contaminated environment. Perhaps the condor, a close relative of the turkey vulture, could also come to be less susceptible to lead exposure over time.

I will not go too deep into this science here (which is, anyway, around the edges of my expertise). But three points are key. First,  there is no guarantee that evolution will yield a particular trait in a species. It is possible that condors are not capable of developing a tolerance of the lead that humans are introducing into their environment (that tolerance could be biochemical, behavioral, or something else).

Second, evolutionary changes typically occur over many generations. This means that the rate of evolution for a species is strongly influenced by the length of the interval from birth to reproduction. Organisms with minimum generation intervals of a year or less can evolve rapidly. Hence, insects rapidly become resistant to some insecticides. But the time from hatching to first reproduction in California condors is about 7 years so we have to expect that evolution in condors will be slow.

Third, the capacity for organisms to survive environmental stresses usually involves trade-offs. So, for example, organisms that are tolerant of one kind of stress may be less tolerant of other stresses or may have lower growth or reproductive rates. This point is relevant because condors face multiple human-imposed stresses.

In short, it is unlikely that, in Benson’s words, a “little time” would allow condors to develop a meaningful tolerance to lead.

Benson is open to “some human facilitation” of condor’s evolution and two possible forms of human support come to mind. If there are now enough condors being raised in captivity and the wild so that some could be diverted to an artificial selection program, then the development of lead tolerance, if it is possible, could be accelerated. Or, perhaps California condors could be genetically engineered for lead tolerance by adding genes from lead-tolerant species of organisms. But neither of these approaches strike me as less intrusive than working to remove lead from the environment and, in the meantime, treating condors for lead poisoning.

I am open to, as Benson writes, “new possibilities for [California condor] flourishing over the long term”. I expect others would also be open to alternatives to current management strategies if they were likely to be successful. But these possibilities need to be rooted in realities, including the science of evolution and a recognition of the multiple stresses that modern humans impose on condors. 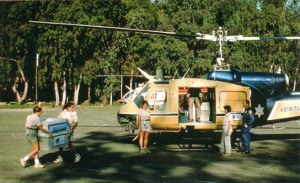 Setting aside the scientific aspects of Benson’s proposal, there are ethical issues that are relevant to all species threatened with extinction as a result of the activities of modern humans. For example, if the decision is made to allow species the opportunity to evolve in their human-modified environment, would it be acceptable to allow one species to go extinct if nine others found their own way to survival? Would it be acceptable to allow nine species to go extinct so that one could find its own way to survival?

To focus on the ethics of Benson’s proposal, imagine humans in place of condors. Such an imagining is appropriate in this case because the book in which Benson’s chapter is published concerns similarities in the endangerment of non-human species and of human cultures and cultural artifacts.

So, if some human societies are unable to adapt to the modern world, even with some assistance, should they be allowed to become extinct? This has, of course, already happened. But do we consider it acceptable to allow it to continue to happen? Even more to the point: If a human community finds itself in an environment contaminated by lead, is that community being deprived of something if those outside the community treat their symptoms of lead poisoning and take actions to prevent further poisoning? Do such actions from the outside deprive community members of the opportunity to, in Benson’s words, “innovate, experiment, or adapt to changing circumstances”? 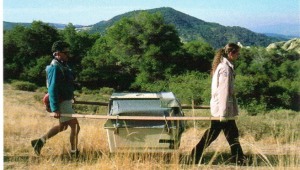 For me, the larger point is what kind of world we want to have now and leave for future generations. Do we want a world dominated by the consequences of humans being humans who have little regard for other species? Do we consider it consistent with our humanity to just “do our thing” and let the chips fall where they may? Or, should we do our best (which will never be enough), to care for our world and address the challenges that we have created for the non-human inhabitants of our world?

During the height of the debate over whether or not to intensively manage California condors, the pro-management position was summarized as “better bred than dead” (see, for example, Julian Pettifer and Robin Brown’s Nature Watch, published by HarperCollins in 1994). This implies that the anti-management position was “better dead than bred”. Are we willing to allow species to go extinct to avoid the risk of depriving these species of some of their essence? It may be that management is depriving condors of some of their essence, but surely extinction would deprive them of all their essence and much more.

I appreciate Etienne Benson’s research and his willingness to consider the difficult issue of endangered species.

For a relevant and notable example of a species’ failure to adapt to an environmental stress imposed by modern humans, see Susan Freinkel’s American Chestnut: The Life, Death, and Rebirth of a Perfect Tree, published by the University of California Press in 2007.

Two previous posts to this blog are relevant to the topic considered here: Are nearly-extinct species ruins? and Vanishing birds.

Except as noted, all photographs in this post are from the Spring 1997 issue of Zoo View, the magazine of the Los Angeles Zoo.