The April 1948 issue of The American Girl magazine features Margaret Leighton’s short story “The Legacy of Canyon John”. A California condor is the heart of this story and one can be seen in Roy Clinker’s accompanying illustrations.

Five years later, “The Legacy of Canyon John” was reprinted in a collection of short stories and with new art work by Robert Sinnott. This multi-volume story collection, edited by Marjorie Barrows, was titled The Children’s Hour (Spencer, 1953). Leighton’s short story is in volume 7: Favorite Mystery Stories.

In this post, I describe Leighton’s story (avoiding spoilers), show the condor illustrations of Clinker and Sinnott, and note how I found the two versions of “The Legacy of Canyon John”.

Along the way there is horseback riding, gun fire, and photography, all in a spectacular setting. The story offers a mystery that Linda and Jerry solve and the story has a good moral. All this is fitting given that The American Girl was the magazine of the Girl Scouts of America.

Canyon John’s bequest is based in fact, as described by Harry Harris in his article “The Annals of Gymnogyps to 1900”, published in the January 1941 issue of The Condor. Perhaps Leighton learned about the relationships between Native Americans and California condors from this article.

Now to the art. Here is a portion of the first page of “The Legacy of Canyon John” as it appeared in The American Girl:

Clinker’s illustration captures many features of the story (note the rocks spraying away as a gunshot strikes the cliff). 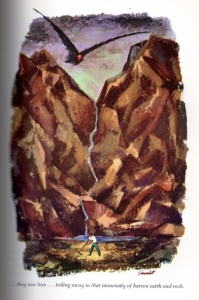 Sinnott features the condor and the canyon, at the expense of conveying details of the story. The man with the pickaxe, Dawson, is dwarfed by the surrounding scene. This is in keeping with the story’s moral.

If you would like to read “The Legacy of Canyon John”, I suggest looking for the anthologized version:

This short-story collection is more readily available than the 1948 magazine.

My own “discovery” of “The Legacy of Canyon John” began when I saw an advertisement for Sinnott’s original painting (above). The description of the painting noted only that the bird was a condor and that the story had been published in The Children’s Hour. I was skeptical about the claim that the bird was meant to be a California condor but wanted to know one way or the other. My search was complicated because The Children’s Hour was a title that had been employed over and over.

After much trial-and-error searching of library catalogs and databases, and some email exchanges with used book sellers and with Girl Scouts headquarters in New York (thank you all for your assistance!), I was able to obtain both versions of “The Legacy of Canyon John” described here (there may be others out there).

So now I know that the bird in Sinnott’s painting is, indeed, a California condor. And I have been able to share the art of Sinnott and Clinker here, along with Leighton’s fine short story.

I like to think that “The Legacy of Canyon John” inspired some young people to spend part of their lives working on behalf of California condors or other wildlife, or perhaps Native Americans.