How many California condors are there? It wasn’t that long ago that the number of condors in the world was a mystery that scientists were struggling to solve.

Today, condors are carefully observed, have numbered wing tags, and carry transmitters that allow humans on the ground and satellites in orbit to monitor their movements. The population of California condors is known with far more certainty than the population of humans in California.

But this wasn’t always the case. Efforts to conduct detailed censuses only began in the mid-1960s.

Consider the challenge: Condors can travel 100 miles or more in a day and their habitat includes some extremely rugged terrain. Early censuses relied on widely-dispersed observers. But observers in different places may have spotted the same condors because, at this time, observers could not tell one condor from another. Not surprisingly, some of the early censuses were subject to criticism.

In the early-1980s, scientists discovered that they could reliably distinguish individual condors by their “molt patterns”. As condors lose and regrow their flight feathers, they each have a unique “fingerprint” – or “wingprint” – at a particular point in time. By taking many photos of condors throughout their range and during a short period of time, and then identifying individual condors in the photos, scientists were finally able to determine, with considerable confidence, the number of California condors in the wild.

As a simple way of characterizing the interest of scientists and the public in efforts to determine the California condor population, I searched my condor bibliography. I looked for articles, books, and other published items that included the words “census”, “count”, or “survey” in their titles where these words specifically concerned the California condor population. I included different forms of these words, such as “surveying”. I only considered items published before the year 2000.

Here’s what I found: 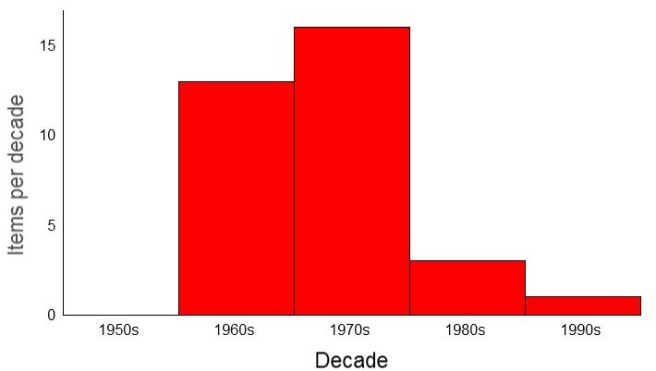 The figure shows a “burst” of interest in censussing, counting, and surveying California condors during the 1960s and 1970s. There was a mystery – how many condors are there? – and people wanted that mystery solved. Interest in the mystery is indicated by the frequent appearance of relevant “headlines” in the 1960s and 1970s.

Since the 1980s, the number of condors has been known with confidence. Good methods are in place for regularly monitoring the condor population. These data are routinely published and show, fortunately, the substantial increase in condors in recent decades. There is no mystery here.

An earlier post concerning the size of the California condor population, and how it has changed over time, is Population headlines.

I recently happened upon “America’s Largest Flyer”, an article in the September 1945 issue of Fauna magazine. Author Henrietta Holland wrote:

A completely accurated “condor census”, of course, is impossible.

Writing at the very end of World War 2, Holland was unable to imagine the human effort and technology that would eventually be committed to the task of determining the exact number of California condors.