Jane Goodall, noted scientist and conservationist, is the author of Hope for Animals and Their World: How Endangered Species Are Being Rescued from the Brink (Grand Central, 2009). This book includes a chapter about the California condor that ends as follows:

I have a legal permit to carry a twenty-six-inch-long wing feather from a condor. During my lectures … I love to take this by the quill and pull it, very slowly, from its cardboard tube. It is one of my symbols of hope and never fails to produce an amazed gasp from the audience. And, I think, a sense of reverence.

In this post I present photos, illustrations, and descriptions of the feathers of California condors.

First, here is a photo that captures some of what Goodall wrote about “her” condor feather:

Nicholas Mariana, Jr. is quite intent on the condor feather he found near Sespe Creek. This photo, by George H. Harrison, was included with the young Mariana’s “Valley of the Condors”, published in the February 1968 issue of Ranger Rick’s Nature Magazine.

The best scientific article about the feathers of the California condor was published in the July 1937 issue of The Condor. The author is Loye Miller, an avian paleontologist who wrote numerous articles concerning the California condor throughout the 1st, and into the 2nd, half of the 20th century. Miller’s opening paragraph describes his subject and provides insights into the human-condor relationship at the time:

This is a sample of Miller’s analysis of condor feathers:

I have 2 books that include foldouts just so they can present life-size images of a California condor’s flight feather. This illustration is from Dick Smith’s Condor Journal: The History, Mythology, and Reality of the California Condor (Capra, 1978): 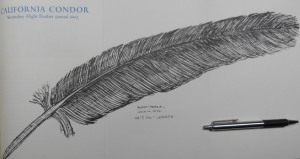 The 2nd foldout is a photograph from Robert Mesta’s Condor: Spirit of the Canyon (Grand Canyon Association, 2007):

There is no photographer credit for the feather above. Lawrence Ormsby created the illustration of the condor in flight.

I included my pen in both images above to provide scale.

Mesta’s book is intended for a young audience, as is The Crow and the Feather: A Tale from the Oak Woodlands of California by Merci Martin and Wanda Bishop (Cupola, 2015). The feather featured in this tale is that of the California condor and the book includes many illustrations of that special feather, including this one:

Jessica Scoles created the illustration above.

To use Goodall’s term, I “revere” the feathers of the California condor. But I’m less taken with their size than with what they do. These feathers permit a 25 pound bird to fly 50 miles an hour at 15,000 feet above sea level – and do so without flapping those great wings for long stretches of time. And then those feathers allow that massive bird to precisely land on a narrow ledge or tree branch where it may spend a cold winter night being kept warm by those remarkable feathers.

For more on Mesta’s Condor see Books for younger children. Smith’s Condor Journal is an Essential book about the California condor.

Finally, please note that it is illegal to possess any feather from a California condor without a permit issued by the U.S. government.