For this, the 100th post to this blog, I present 10 early illustrations of the California condor from books, academic journals, and popular magazines.

People who “saw” the California condor during the 19th century most likely saw illustrations such as those below. Try imagining what you might think of the condor based on these images.

The images are presented in chronological order. The 2 images marked * are from my library. The other 8 images are in the public domain and available from the Biodiversity Heritage Library. 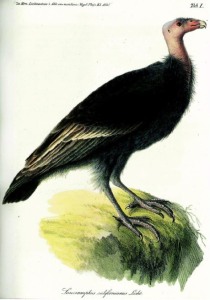 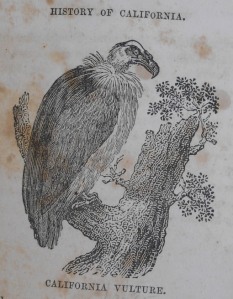 With additional research I hope to identify more of the artists.

Of these 10 illustrations, the one that best captures the California condor is that likely to be by Jean Delarue. This image from Townsend also features nice details of condor habitat. Other images with habitat details are those by Thomas Brown and from Cassin.

It struck me that only half of the above images were published in the USA.

Finally, it is important to keep in mind that the earliest illustrations of California condors that are still with us are those by Native Americans. In a future post I will consider some of this artwork.