The exceptional size of the California condor can be described with numbers and words. But a picture is better.

This post presents illustrations comparing the size of the California condor to more-familiar animals.

Here is a comparison of the California condor to the turkey vulture and the bald and golden eagles:

A California condor egg may only be about twice as long as an average chicken egg, but this means that its volume (and weight) is about 2 x 2 x 2 = 8 times greater:

In this next graphic, the bird at upper left is a robin and the condor is at upper right:

In addition to offering a size comparison, this drawing that also shows the difference between the appearance of a California condor and cousin turkey vulture when flying toward an observer: 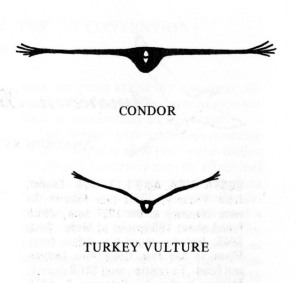 The next graphic includes a “Pleistocene condor” (in blue), referring to the extinct Teratornis incredibilis, as well as a California condor (in red):

This painting shows, from left to right, turkey and black vultures, caracara, and immature and adult California condors. They all appear about the same size. But the note next to the condors explains that the condor images are shown at half the scale of the other birds:

Here is a stylized diagram – with clouds – from a newspaper known for its graphics: 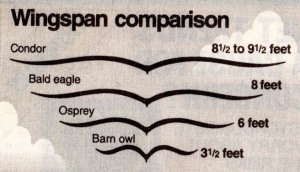 This last illustration appears in the shaded corner of an artwork by Matthew Twombly: 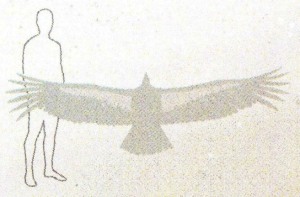 For more of Twombly’s condor illustration, see the previous post The skull.

Four previous posts that include other size-comparison illustrations or photos are:

Since writing this post, I happened upon this nice “word picture” of the size of a California condor:

When the Condor flew from the fence post toward the ground I noted that his wings reached beyond the two fence posts for a distance of ten or twelve inches. They were eight feet apart so this Condor’s wing spread was between nine and ten feet.

The above is from a letter to the editor of News from the Bird-Banders written by Mrs. Will Williams. The letter was published in the October 1950 issue, the timing of which explains why Mrs. Williams first name was not given.