I wish to make a plea in behalf of the educational value of natural history museums.

So wrote Barton Warren Evermann, the Director of the California Academy of Sciences, in the January 1918 issue of Scientific Monthly. Evermann’s article, “Modern Natural History Museums and Their Relation to Public Education”, was 30+ pages of text and photos in support of his plea.

Evermann did not mention the California condor in his article. However, I have acquired original guide books published by 4 museums that do refer to the condor.

First is a 1945 guide from the California Academy of Sciences in San Francisco:

The guide includes this photo of the museum’s California condor diorama:

This is the text accompanying the photo above:

Heading south, this is a 1915 guide from the Los Angeles County Museum:

The guide, by Harry Swarth, includes a photograph of a California condor’s skull that can be found in an earlier post to this blog: Comparing skulls.

A 1964 “Guide and Catalogue” from the Los Angeles County Museum is a substantial book edited by Russell E. Belous and Burton A. Reiner:

The guide is focused on cultural artifacts but one listed item caught my eye:

It is likely that this refers to the quill of a California condor but I have not been able to determine if this is the case.

Now to the east, here’s the engaging cover of a 1954 guide from Chicago’s Natural History Museum:

And here’s a photo from the guide showing the museum’s California condor diorama: 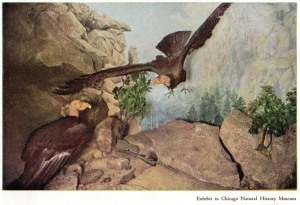 A later guide to Chicago’s museum did not include an image of the California condor: 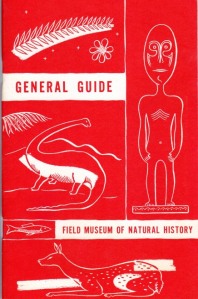 However, this 1967 guide made note of the California condor: 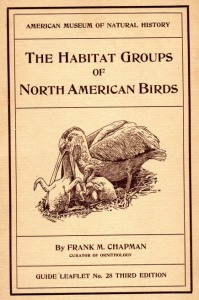 A photo of the American Museum of Natural History’s California condor diorama was included in the guide: 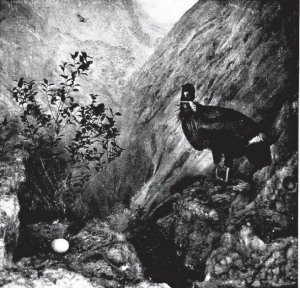 This is the text accompanying the photo above:

The visitor is supposed to be in the Condor’s cave, from which he looks up the cañon.

The cave was not occupied at the time the studies [for designing the exhibit] were made, a passing hunter having wantonly shot one of the birds.

The text also notes that the diorama’s bird was prepared by taxidermist Ernest W. Smith and the background was created by artist Charles J. Hittell.

Have you been to a natural history museum lately?

A previous post to this blog features postcards from museums: Museum diorama postcards. Guide books from zoos are considered in another previous post: Zoo guides: 1879, 1911 & 1923.