In this post I consider 3 articles published in the 1950s in magazines intended for men. The articles provide insights into how the California condor was (or was not) understood by one segment of the public at the middle of the 20th century.

For context: The magazines under consideration are less “racy” than the magazines sold today in supermarket checkout aisles. Their content includes a mix of non-fiction, fiction, single-panel cartoons, and photography. Adventure, get-rich-quick schemes, and sports are major themes of the writing. Most of the advertising is not for major companies. The paper is low-quality.

The April-May 1950 issue of Man to Man includes “Meet the Giant California Condor, the World’s Largest Bird” by Craig Greene and Jack Olsen.

This article begins in a sensational way:

“Those birds are killers! Don’t say I didn’t warn you!”

The writers dramatically describe a treacherous horseback ride into condor habitat and their first condor sighting:

But then the article settles down to offer natural history and arguments in support of protecting the condor. For example:

… the Condor – nature’s original conscientious objector – will not kill, even to eat. He dines only on carrion.

One might think this largest of the world’s birds would have been carefully protected by man. The condor harms no one, keeps the valleys clean of carrion, provides a spectacular sight as he soars high among the clouds. But still he has been slaughtered nearly to extinction. Why? Man, we fear must take sole blame for the near extinction of the California Giant Condor.

Unfortunately, there is also serious misinformation, such as this:

Ranchers settled in the valleys below the Condor’s eyries threw out poisoned carcasses to kill coyotes and mountain lion. It was thought at one time that these poisoned carcasses were killing the Condors, too. But a strange fact has come to light. Condors are immune to poison! Something about the way their stomachs work makes them able to eat the strongest death-dealing potions with no apparent ill effects.

The black and white photos accompanying the article include this one: 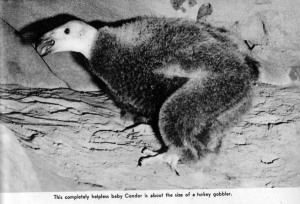 There is humor in the article, such as this description of a California condor:

Just a big, hungry glider with feet – that’s our bird.

And the final paragraph offers a nice twist:

There’s just a chance that these last 85 leisurely characters, or their descendants, may be around come another ice-age. Perhaps they sit up there in their last stronghold, watching the strange, wingless creatures who come crawling up the mountainsides – as we did – to look at them, and tell themselves: “These animals will be extinct in another hundred years. We can wait.”

This article is about an adventurer and a sportsman. According to the author:

The two men follow a hobby of capturing wild animals …

There is a mention that live specimens are auctioned off to zoos. However, this article is about telling the tale of a “battle”, not an account of acquiring specimens.

The article is focused solely on the Andean condor; no mention is made of the California condor.

The article’s 1st page shows a sequence of 9 color photos of a man wrestling with an Andean condor. The 2nd sentence alone makes 2 erroneous statements:

The world’s largest bird, closest living relative of the prehistoric Archaeopteryx, the condor often has a wing span of fifteen feet or more …

So it is probably fortunate that the California condor does not receive a mention from Wiggins.

The 3rd article, from Blue Book, a “magazine of adventure in fact and fiction”, is a significant step up from the articles in Man to Man and Argosy. Blue Book has no advertisements or images of women in swimsuits, and the prose is down to earth.

“Condor’s Don’t Pay Taxes”, by Alvin M. Josephy, Jr., is a substantial, readable article in a journalistic style. The framework for the piece is the conflict between the preservation of California condors and development of mineral resources, and the debate over establishing a condor sanctuary in Ventura County. Along the way there is history of the human-condor relationship and natural history.

A major part of the article concerns Carl Koford’s research on condors and the role his findings played in decisions to protect condor habitat. The oil companies were not happy that Koford’s research provided evidence that industrial activity was detrimental to the condors:

The oil men were incredulous that a mere college boy was responsible for their troubles. The very idea galled them, yet as they realized that it was going to be the birds or themselves, they hastened to the conclusion that Koford had to be contended with as a major enemy.

I don’t know whether Josephy or those “oil men” came up with “mere college boy”. It should be noted that, by the time Josephy’s article was published, Koford had earned his Ph.D. from the University of California, Berkeley and served in the Navy during most of World War 2.

The title of Josephy’s article is explained as follows:

… another of the oil men managed with a fervent appeal to win the Ventura Board of Supervisors to his side. “Gentlemen,” he exclaimed at a public hearing called by the Board to investigate the controversy going on in its county, “condors pay no taxes!”

Despite that title, article is a balanced account for its time and, having just reread it, this piece does not really belong in the same category as the articles in Man to Man and Argosy.

Josephy’s article is accompanied by Carl Burger’s nice illustrations, including this one: 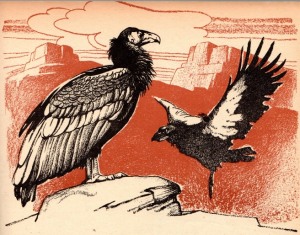 Alvin Josephy’s role in the human-condor story was not limited to his Blue Book article. He also co-wrote the screenplay for a major Hollywood movie in which the California condor plays an essential part. I will write about that movie in a future post.