Interest in the California condor has long extended beyond the borders of the USA. In this post I consider 4 magazine articles that were published in Europe during the 20th century.

The translations below are the product of web translators and my very limited knowledge of the 4 languages involved.

The article title translates from the French as “Four Months with California Condors”.

Here is the first sentence followed by a translation:

A very ardent passion for science, and also, no doubt, a penchant for adventures that entail some risks have made an American naturalist undertake a rather unusual expedition.

That naturalist was William L. Finley, an important figure in the California condor saga. Several photographs taken by Finley and his collaborator Herman T. Bohlman accompany the article, including this one:

Another photo shows both Finley and Bohlman in search of a condor’s nest (leaving me to wonder who was behind the camera): 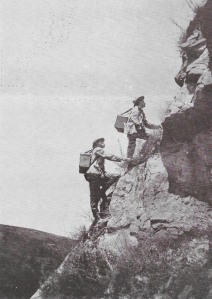 This photo is from the inside back cover of the September 1971 issue of Der Falke: 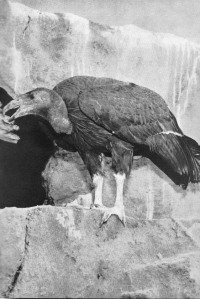 On the facing page is author Heinrich Dathe’s text for what appears to be a regular feature of the magazine. The article title translates from the German as “Our Bird Atlas: 69. Californian Condor”.

Der Falke translates, not surprisingly, as “The Falcon”. But I have also seen “Falke” translated as “hawk”. This magazine was published in the former East Germany by a firm identified as a press for popular science literature.

The May 1986 issue of Fauna och Flora includes author Keister Brood’s “Den sista kaliforniakondoren?”. Below is the accompanying English-language summary, beginning with a translation of the article’s title.

The article is accompanied by a photo of a stuffed and mounted California condor specimen in the Swedish Museum of Natural History: 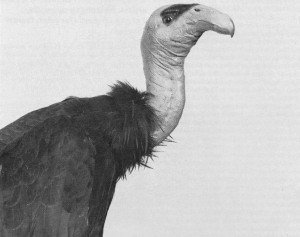 Six photos by Belterman accompany the article and are evidence that this photographer visited the Los Angeles Zoo. Here’s one of the photos:

Complete translations of these 4 magazine articles will have to wait for another day. But even without knowing the details of their contents, the articles demonstrate the long-standing and widespread interest in the California condor.