In 1882, Albert Kellogg described the sugar pine (Pinus lambertiana) as a “vast sylvan condor”. Such a lovely simile deserves a closer look.

Kellogg’s Forest Trees of California was published by California’s State Mining Bureau in 1882. 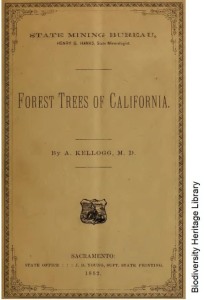 The author’s words make plain his enthusiasm for the sugar pine:

One of the most magnificent pines the world ever saw is the Great Sugar Pine of California!

This is Kellogg’s comparison of the sugar pine to the California condor in full:

… we behold the Great Sugar Pine stretching his wide wing-branches against the sky, like a vast sylvan condor soaring aloft high up over all continuous trees …

That characteristic, spread-wing form of mature sugar pines may be seen in these images: 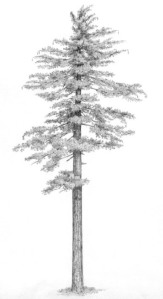 The excellent illustration above is by Matt Strieby (and shown here with his kind permission). The uncredited photo above is from a 1916 report by Louis T. Larsen and T. D. Woodbury.

Warren R. Randall and colleagues rather plainly describe the form of the sugar pine as:

… an open crown composed of a few long, nearly horizontal branches, with long cones, mostly solitary hanging from the ends of these branches.

Thomas Elias’s description of the sugar pine as a pine could also apply to the California condor as a bird:

… the titan of North American pines, … the largest and stateliest of all native pines.

There is considerable overlap of the habitat of sugar pines and California condors. This beautiful range map is from a 1938 report by E. N. Munns: 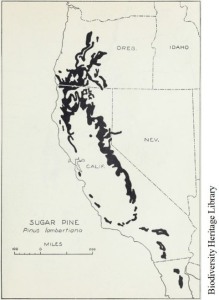 (Condor habitats, past and present, may be seen in the post Range maps.)

So given the sugar pine’s size, accommodating branches, and location in condor territory, I expected to be able to find photos of California condors roosting in sugar pines. But my search yet to be successful. I would welcome learning of such photos.

Sugar pines occasionally receive mention as roost trees for condors. For example, in Carl Koford’s 1953 report on the California condor he notes:

At the head of Sisquoc canyon and in other similar high areas yellow pines (Pinus ponderosa and P. jeffreyi) are the main roosting trees although sugar pines (P. lambertiana) are also used.

No consideration of sugar pines would be complete without noting the extraordinary size of the (female) cones. Elias lists them as being up to 18 inches in length. Guinness World Records reports that the world’s longest pine cone is a 22.9 inch cone from a sugar pine.

This cone was collected in California’s Yosemite National Park:

It is remarkable that these large cones are held at the tips of sugar pines’ long, horizontal branches (look close at the drawing of the sugar pine above).

Looking for more about the sugar pine, I found this description by John Muir:

No two are alike, even to the most inattentive observer; and, notwithstanding they are ever tossing out their immense arms in what might seem most extravagant gestures, there is a majesty and repose about them that precludes all possibility of the grotesque, or even picturesque, in their general expression. They are the priests of pines, and seem ever to be addressing the surrounding forest.

Surely those words could also be applied to the California condor!

Albert Kellogg’s “vast sylvan condor” reached an audience well beyond the readers of his State Mining Bureau report. The report was excerpted in the 11 November 1882 issue of the Pacific Rural Press, a widely-read magazine of the time.

For more on the relationship between California condors and trees, see the post Live trees or dead trees?

The photo above shows a nestling condor doing its best to “be like a (dead) tree”. Tim Huntington’s remarkable photo appears in the annual report of the Ventana Wildlife Society titled 100 Condors!