I recently stumbled upon a small treasure of a book called The Chickadees: A Contemporary Fable. While chickadees are at the center of this tale, condors play an essential part. Here are some extracts, comments, and images.

The author, Conrad Hyers, is a student of Zen and the book’s foreword he explains that The Chickadees is “a fable form of a more academic book” that he previously published. 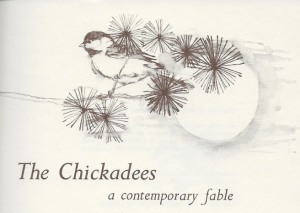 The book, published in 1974 by Westminster, includes illustrations by Ed Piechocki that capture the lively spirit of chickadees.

After telling of chickadee life “between the mountains and the sea”, the action begins:

One day, quite unexpectedly, a new imagining took place. It had not been foretold by prophets or seers, of which there were none, for the Chickadees had no need of any. It was occasioned by the straying of a great Condor out of the mountains. They had seen large birds before: the Crow, the Owl, and the Hawk. But never a bird like this! His ten-foot wingspan was thirty times their own, with more than seven hundred times the flying surface! Indeed, a single wing feather was larger than several Chickadees lined tip to tip! And his weight must have been that of a treeful of Chickadees!

The giant Condor seemed to them to have come down from the heavens, perhaps to be an emissary of the golden Sun-Bird himself. His bare, orange-yellow head, set on a serpentine neck of similar shading, was certainly the color of the sun!

As the condor lands, feeds on a deer carcass, and flies off, the chickadees watch, “huddling in fear and wonder”. After coming to their senses, the chickadees react to what they have just witnessed:

Oh, to be able to fly as the Condor flies, to soar up the mountainside, to spiral effortlessly above deep canyons and disappear in the clouds! Oh, to drift without motion, yet at great speed, across the heavens! …

Their flying seemed scarcely worth doing anymore. And their world suddenly looked so small and shallow and circumscribed….

If only we had been hatched among Condors, on the high mountain ledges! If only, at least, we could learn to fly without flying!

To emulate the soaring flight of the condor – “to fly without flying” – becomes the 1st stage of the chickadees’ quest.

As that quest continues, the chickadees – and the reader – learn important lessons, all very much in the tradition of Zen. Here is a taste, from the beak of an “Old Chickadee”:

Before the immensity of the sky, what is the difference between flying high and flying low, or flying not at all? Is one nearer the heavens in brushing against the clouds than in flitting from bush to bush, or hanging upside down …. And is there more freedom on high mountain ledges than in deep gullies and dense thickets?

The Old Chickadee goes on to describe a long-ago conversation with a condor in which the great bird said:

I envy your short, stubby wings; I have such difficulty in flying among the trees! 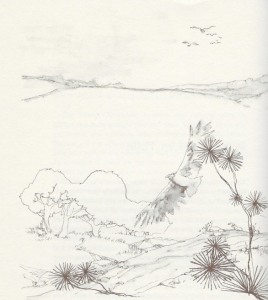 In the book, Hyers’s condor is never referred to as a California condor. So is it?

While the author teaches at a college in Wisconsin, the book’s setting suggests a very different locale. During their adventures, the chickadees of the story encounter a mountain chickadee, a species found only in western North America.

In beautiful prose, the author describes valleys, mountains, and an ocean. The relative position of these features and other details are consistent with the area surrounding what is now Los Angeles.

The strongest clue that the “condors” are California condors is the color of their heads and necks, as described above. The world’s other species of condor, the Andean, lacks the sun-like head and neck color of the California species.

The Chickadees: A Contemporary Fable has considerable charm and offers worthwhile life lessons. It is a fable very much worthy of contemplation, even 4 decades after its original publication.