This blog includes many posts about articles in newspapers and general-interest magazines. This is because these publications were likely to be found in the hands of a large, diverse readership. Before the internet – and even more so before television – newspapers and magazines were how people learned about our world, including the California condor.

Another widely-available source of information in the pre-internet years was encyclopedias. Encyclopedias covering “all” topics were once fairly common in households, whether in the form of single, large volumes or multi-volume sets. This post is about the presentation of the California condor in these reference works.

Accessing older encyclopedias is a bit of a challenge. Many are still being published, which means that older editions remain under copyright and are not available online. Libraries do not typically retain past editions of encyclopedias; they replace them with newer editions.

But encyclopedia volumes from the mid-20th century are often available from book dealers. I have acquired several of these and report on them here.

As I did not see any of the encyclopedias discussed below before purchasing them, this post is strictly a “potluck-style” overview. Also, I only purchased volumes that include  “Condor”. There may be more about the California condor in other volumes of these encyclopedias.

The 14th edition of The Encyclopædia Britannica was published in 1929. The “Condor” entry begins:

… an American vulture (Sarcorhamphus gryphus), almost the largest of existing birds of flight.

The California condor (gymnogyps californianus) is found in the Coast ranges of southern California from Monterey bay south to Lower California and east to Arizona. It has white under-wing coverts, with a wing spread of 10 ft.

A single drawing accompanies the text:

The caruncle on the bird above indicates this is an Andean and not a California condor, despite the caption. 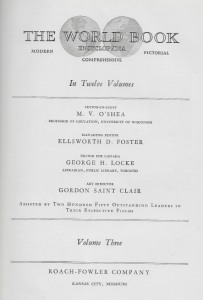 The “Condor” entry in The World Book Encyclopedia for 1930 begins:

… the name of certain large species of vulture. Keen of sight and smell, wonderfully graceful in flight, condors inspire both admiration and repulsion, for their eating habits are disgusting. The best-known species is the South American condor …

The entry’s last paragraph focuses on the California species:

The California condor is now confined to the San Bernardino Mountains of Southern California. Efforts are being made to prevent the extinction of this great bird …

A fine photo of 2 roosting California condors accompanies the text:

The 1945 edition of Funk and Wagnalls New Standard Encyclopedia of Universal Knowledge is notable for its small format and thin paper. A note on the copyright page explains that the publisher had to comply with the rules of the War Production Board.

Nearly a page is devoted to the entry for “Condor”. This begins:

… any one of several species of large American vultures. Usually applied to the great vulture … of the Andes, one of the largest of known flying birds, the albatross and the California condor sometimes exceeding it.

The entry includes a small drawing of an Andean Condor and the text is devoted to this species until the concluding paragraph, which reads:

Closely related to the condor, but distinguished by differences in the cartilaginous comb, bare neck, and shape of the bill, are the king vulture … and the Californian vulture (Pseudogryphus californianus)…. The Californian vulture is often longer and of greater expanse of wing than the condor, but is usually not so heavy a bird. It is duller colored, and has less white on the wings. Its range was restricted to the Pacific coast region, from Oregon southward; it was nowhere really common, and it has now become extinct, except in southern California.

This is a curious entry. After mentioning the “California condor” at the beginning, the text switches, without explanation, to “Californian vulture”, a name that was outdated in 1945. The scientific name given, Pseudogryphus californianus, is one of the latest uses of this “old” name that I have encountered. It is also notable that the king vulture is considered a condor, an unusual classification.

The 1951 edition of Compton’s Pictured Encyclopedia and Fact-Index devotes almost a half page to its “Condor” entry. This text begins:

The mighty condors are the largest of vultures and among the largest of birds… One genus lives in the high Andes …; another in the Sierra Madre of California. To prevent the California condor from disappearing, a special condor reservation is maintained int the Los Padres National Forest.

Here are 2 more excerpts from this entry:

These giant birds have all the unpleasant habits of the vulture group, but when flying they are among the most majestic of creatures…. On the ground, however, they are clumsy …

Fewer than a hundred individuals of the California condor exist today. Although it is rigidly protected by state and federal law, advancing civilization has doomed it to extinction.

This entry includes a black and white photo of the California condor diorama at the Chicago Natural History Museum. The photo’s caption is “The Great Bird of the Mountain Heights”. A color version of this photo can be seen in the post Museum guides: 1915-1967.

The Encyclopedia Americana for 1961 includes an entry by C. Vaurie of the American Museum of Natural History. The text considers both California and Andean condors but confuses the two species at the end. Given that Carl Koford’s 1953 report on the California condor is cited, I suspect the error lies with an editor and not Vaurie. The only image is a small photo of the Andean condor.

The “Condor” entry in The World Book Encyclopedia of 1968 is credited to noted ornithologist Olin Sewall Pettingill, Jr. Most of this entry is devoted to the California condor. The entry begins:

… a large vulture. The condor of North America, called the California condor, is the largest land bird on the continent…. Only about 40 California condors are still living today. They live in a sanctuary in Los Padres National Forest in southern California.

While the above encyclopedias are all multi-volume works, the 1940 Webster’s Encyclopedic Dictionary is a single, 3-inch thick volume. 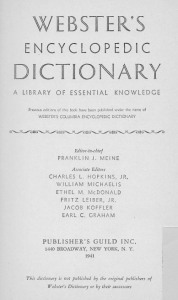 Half of this work is a dictionary. The other half includes sections titled “Atlas and Gazetteer”, “Cyclopedia of Business and Finance”, “Office Worker’s Manual”, and the like.

A South American bird, on of the largest of the vulture tribe, found most commonly in the Andes at heights from 10,000 or 15,000 feet above the level of the sea.

The only mention of the California condor in this work is in an illustration titled “Carrion Birds and Birds of Prey”. This color artwork is shown in the post Color illustrations from books: 1930-1979.