Ford’s work explores where natural history and human culture intersect…. Using the visual language and medium of nineteenth century naturalist illustrators such as John James Audubon, Ford masters the aesthetics of scientific truth only to amplify and subvert them, creating provacative, and sometimes fanciful narratives out of facts.

The California condor appears in the exhibited paintings in both real and surreal form. Here’s a look.

The catalog for this exhibition, published in 2017 by Gagosian, includes excellent images of entire paintings, details from paintings, and working sketches.

The triptych “La Brea” shows prehistoric animals emerging from tar pits. The scene includes the expanse of urban Los Angeles and is all backed by a spectacular sunset. This detail includes a California condor (or one of its extinct relatives): 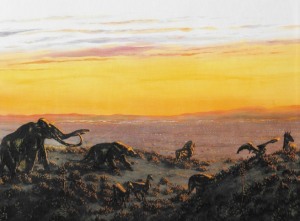 Instead of the griffin traditionally depicted in European art and fantasy, which is half-lion, half-eagle, Ford creates a “New World” griffin by merging species native to California; he combines the the lower body of a mountain lion, and the talons, beak, and blue-black shimmering feathers of the critically endangered California condor ….

This is the painting “Grifo de California”:

Ford also shows us the chicks of his California griffin in “Los Niños”:

The detail in these paintings is remarkable. That detail begins with the artist’s working sketches: 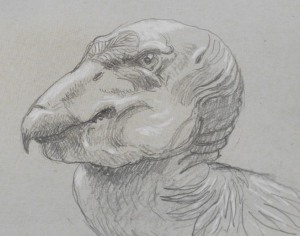 Given my interest in the California condor and the fact that the name of this blog translates from the Greek as “false griffin”, it is hardly surprising that I was elated to discover Walton Ford’s magnificent Califia paintings. In a future post I will consider griffins and how they relate to the history of California.