The California condor art created by Roger Tory Peterson ranges from simple sketches to detailed paintings. In this post I show 5 of his works that have not previously appeared in this blog. I also provide links to earlier posts that include more of Peterson’s excellent artwork.

The first 2 illustrations are from The Bird Watcher’s Anthology, edited by Roger Tory Peterson and published in 1957 by Harcourt, Brace.

Next is a minimalist sketch from the 1961, 2nd edition of Peterson’s A Field Guide to Western Birds, published by Houghton Mifflin:

Here is a drawing from The Birds, edited by Peterson and published in 1963 by Time: 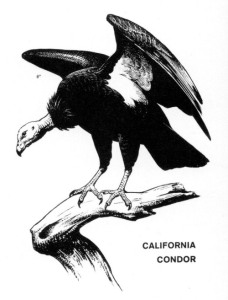 Last is a detail from a painting of 15 endangered species of birds:

The other (scowling) bird above is a New Zealand laughing owl. This last artwork appeared in the April-May 1974 issue of National Wildlife magazine.

More of Roger Tory Peterson’s artwork may be seen in these posts: