There are historical reports of California condors in Canada. For those who like to consider the evidence, here are details from 8 sources.

In volume 2 of John Keast Lord’s The Naturalist in Vancouver Island and British Columbia (1866) the entire entry for Cathatis californianus is this:

The 1st bird species listed in the Catalogue of Mammals, Birds, Reptiles, and Fishes, of the Dominion of Canada by Alexander Milton Ross (1878) is the California vulture. This book’s title page indicates that the included species were “collected and classified” by the author. But no other information about the California vulture is provided.

In September, 1880, I saw two of these birds at Burrard Inlet. It is more than probable they are accidental visitants here.

A similar entry for the California vulture is included in “The Birds Observed in British Columbia and Washington during Spring and Summer, 1892” by Samuel N. Rhoads:

Seen on Lulu Island as late as “three or four years ago” by Mr. W. London. “None seen since, used to be common.”

Rhoads’ article is in the Proceedings of the Academy of Natural Sciences of Philadelphia (1893).

In the January 1897 issue of the Auk, John Fannin reports that:

On the 10th of September last (1896) I saw between Calgary and the Rocky Mountains two fine specimens of the California vulture, Pseudogryphus californianus. I was not aware that this bird was found east of the Rocky Mountains, or so far north as the point above mentioned.

With the beginning of the 20th century, skepticism about the 19th century reports begins.

Here is the relevant text from the 1909 Catalogue of Canadian Birds by John and James M. Macoun:

“A Distributional List of the Birds of British Columbia” by Allan Brooks and Harry S. Swarth was published as Pacific Coast Avifauna 17 in 1925. The entry for the California condor is under the heading “List of birds ascribed to British Columbia on unsatisfactory grounds”. 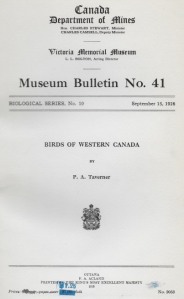 The only mention of the California condor in P. A. Taverner’s 1926 Birds of Western Canada is in the entry for the turkey vulture:

There is a record of the California Condor in southern British Columbia, but it seems to have an uncertain basi[s]