In 1926, a new ornithological “journal” appeared. The Buzzard was published by the Cuckoo Ornithological Club of Los Angeles. I recently acquired the first 2 issues. Of course, the California condor makes an appearance. Here’s a look.

The new publication was a spoof on the Condor, which was published by the Cooper Ornithological Club.

The California condor is mentioned in the second issue, as part of what appears to be an inside joke:

The Buzzard included articles, such as this one from the second issue:

Mankind must take warning, and profit by the lesson. The Cowbird’s scheme is obviously the only way in which any form of life can succeed in the long run…. By having the young attended to by those who make a business of it, the rest of the race can be assured of days of progress and nights of peace.

Like “real” ornithological journals, the Buzzard included advertisements for books: 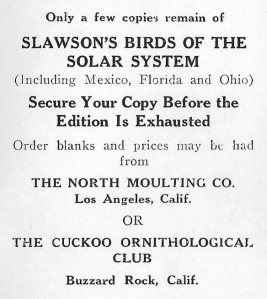 I am not sure why Mexico, Florida, and Ohio were singled out in this advertisement. But I can explain 2 other details. The South Moulton Company had recently published William Leon Dawson’s The Birds of California and there is a suburb of Los Angeles known as Eagle Rock.

Unlike its serious brethren, the Buzzard included a collection of jokes under the heading “Gag Garage”. Here’s one that reveals a topic on the mind of ornithologists of the day:

In its first issue, the Buzzard had some fun with the Auk, a “real” journal:

Finally, here’s the back cover of the second issue: