This post is about “The Boy Who Flew with Condors”, an episode of the television series Walt Disney’s Wonderful World of Color. The episode, based on a story by Ken Nelson, was first broadcast on 19 February 1967.

Walt Disney himself introduces the story with excellent – for the time – moving photography of various birds in flight. Disney’s pronunciation of condor reminded me that the word was not always as familiar as it is today. Disney spoke of the kahndur, running the 2 syllables together.

When the story begins, the narrator (Leslie Nielsen) introduces us to a “boy” who studies California condors as a hobby. This teenager wishes he could also “soar on magic wings above the Earth”. We see condors as through the boy’s binoculars: 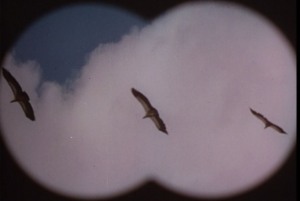 The narrator describes California condors as they are often described:

When at rest, the condors were grotesque creatures…. Objects of ugliness.

It is unfortunate that those negative words are spoken as we watch a parent condor feeding a chick:

The narration continues as condors are shown in flight:

But when [condors] took to the air, a transformation seemed to take place. They became masters of their element with a majestic beauty all their own.

While watching condors, the boy observes a sailplane. The narrator describes his reaction: “Here was soaring to match the great condors”.

Next comes the boy’s first sailplane ride, during which we hear explanations of soaring theory and sailplanes by pilot Fred Harris. Then the narrator tells us that:

For the first time [the boy] understood how the great condors could remain airborne for hours on end. Now he was caught up in that same world of wonder …

With that, the story shifts to sailplanes and related topics. But near the end, as the boy encounters dangerous weather while flying a long cross-country route, the narrator explains:

Then, wonder of wonders, [the boy] saw a familiar form. It was his old friend the condor leading him to clearer air and safer skies. He knew that if he would stick with these masters his battle would be won. He followed their every move and became, for the moment, a condor himself.

We see more condors in flight:

And a sailplane flying near a condor:

An article in the December 1966 issue of Private Pilot magazine provides details about the making of “The Boy Who Flew with Condors”.

Don Downie’s “The Compleat Pilot: Try It on Quiet Wings” also argues that pilots of motorized aircraft should spend some time flying sailplanes.

[Pilot Fred] Harris learned a great deal about the behavior of birds during the summer-long filming of this true-to-life film. Part of the air-to-air footage of condors, turkey buzzards and eagles was with photographer Ken Nelson. However, most of the footage was taken with automatic cameras mounted on the nose, wings and tail of the sailplanes.

“[The birds] didn’t seem to object to the sailplanes, but we were never able to get in close with the power planes; just too much noise”, explained Harris…. The … condor was scared if we flew above him. However, if we came up from below or the side, it didn’t seem to bother him. After a few flights, he seemed to get used to us.”

Given the large audience reached by Walt Disney’s Wonderful World of Color, I expect that “The Boy Who Flew with Condors” introduced many people to the California condor. However, that introduction was a seriously limited one, providing no information about the natural history or conservation status of the condors. (What a lost opportunity!)

Ed Harrison, a long-time student of the California condor, is listed in the credits for “Additional Condor Photography”. The National Audubon Society is also credited.

While “The Boy Who Flew with Condors” is about a boy, the film’s co-star is a 14-year-old “girl” who, at the outset, is already an accomplished sailplane pilot. This girl first introduces the boy to sailplanes. When he hesitates learning to fly, the narrator tells us what’s inside his head: “If a mere girl could do this, why couldn’t he?”

I recall seeing this episode of “Disney” when I was young. I may even have seen the premiere and may have seen it in color as this was about the time my father built a color television to replace my family’s black and white model.

As expected for Disney, the California scenery shown throughout the episode is beautiful: the coast, oak woodland, desert, and Sierra Nevada (even Mono Lake).

The screen captures above are from a DVD version that I purchased for my library.

For another post about television programs concerning the California condor, see What’s on TV? For more on condors and aircraft, start with the post Namesakes: aircraft.