In 1926, Walter Fry wrote a valuable, if brief, report about the California condor. Here’s a look at that report, its significance, and other contributions by Fry.

According to the National Park Service’s online biography of Walter Fry, during 1901-1930 he held a sequence of posts at Sequoia National Park including road foreman, ranger, chief ranger, and superintendent. The comprehensive California: A Guide to the Golden State (Hastings 1939) notes that:

In 1922, Fry helped establish the Nature Guide Service, a contribution towards the educational mission of the national parks. Bulletin 23 published by this group was Fry’s “The California Condor – a Modern Roc: The Arabian Nights Come True in California”.

This bulletin is 2 single-spaced, typed pages. (The librarians at Sequoia and Kings Canyon National Park kindly provided me with a copy of these nearly 100-year-old, and I’m sure, fragile pages.)

In addition to basics such as the size of condors, the bulletin includes several descriptions of sightings of these birds in the park. But much of the content concerns human threats to the condor and their values. Here’s a sample:

Those were the first Condors that I had seen, and such was their size and curious appearance they seemed to me rather the birds of some fabulous tale than ones that lived in these modern days.

The California Condor is now making its last flight for life. Unless some action is taken to save the modern roc it will join the dodo and the great auk as a legend instead of a living example of the Creator’s handiwork…. Every friend of birds and of the picturesque in nature should come to the rescue of the Condor before it is too late.

Fry’s knowledge of the California condor soon reached a much larger audience. It appeared verbatim in the April 1926 issue of American Game magazine, where it was accompanied by a black and white illustration of a roosting condor. The full text also appeared in the May 1926 issue of the Gull, the newsletter of the Audubon Association of the Pacific (San Francisco). The Literary Digest for 7 August 1926 quoted Fry’s words in a substantial article about the condor (Literary Digest was a major national magazine at the time).

Perhaps the connection between the California condor and Sinbad’s great Roc was part of the reason for all the interest in this government report.

A decade later, Fry’s accumulation of expert knowledge of birds in Sequoia National Park was acknowledged in E Lowell Sumner, Jr’s 1937 Check-List of the Birds of the National Parks.

I will close this post by noting a book coauthored by Fry in 1938 about giant sequoia trees, another exceptional species: 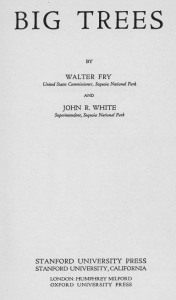 The book is a wonder to read, full of excellent photographs, and includes this beautiful map with illustrations of giant sequoias: 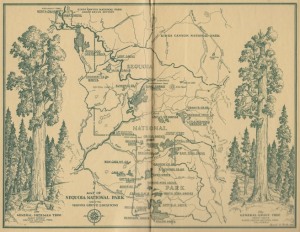 Those who value California condors and giant sequoias should remember Walter Fry.