The theme of this blog is “California condors and humans through time”. That condor-human relationship began, of course, with Native American peoples.

In this post I show 6 published images of Native American cultural objects associated with the California condor. 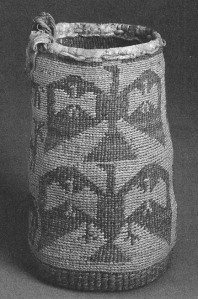 The caption for the next photo reads, in part:

Condor country is dotted with caves, many of them containing drawings left by early man…. Probably unique is [this] attempt at purely realistic painting – a giant condor is seen with feet outspread, ready for flight. 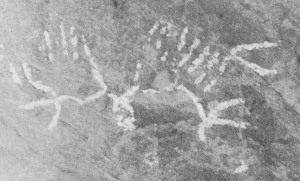 An uncredited drawing of a cave painting is captioned “This may be a condor or condor impersonator”:

Next is a “Ritual cloak from skin of California condor”: 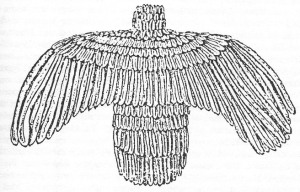 Source: Okladnikova, E A. 1983. The California collection of I. G. Voznesensky and the problems of ancient cultural connections between Asia and America. Journal of California and Great Basin Anthropology. Summer and Winter.

The caption for the photo below, from a 1938 article in Anthropological Records by G A Nomland, is:

Nora Coonskin, last shaman of the Bear River Tribe in northern California (near Cape Mendocino) holding what appear to be California Condor primaries, circa 1930. 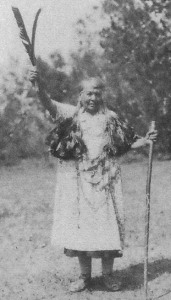 The caption for the last photo, by Trudy Haversat and Gary S Breschini, reads, in part:

Bird bone tubes and whistles from an archaeological site in Watsonville, California (CA-SCR-44). The bottom whistle was made from the left ulna of a California Condor. 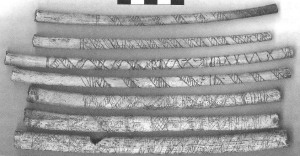 The 6 images above are by themselves a powerful demonstration of the importance of the California condor to the original peoples of western North America.

A previous post to this blog includes a sketch of a condor feather that is described as being part of a “Wiyot shaman’s outfit”: Scientific sketches: 1875-1983.