Ever interested in the language that humans choose when discussing the California condor, here I consider items published with the word “comeback” in the title. These span several decades.

In this 1st item, the comeback in the title does not refer to the condor but offers a relevant contrast:

This article claims that condors have “virtually outlasted their food supply”. The thriving turkeys are those in upstate New York.

Of the items noted in this post, this is the only one where an individual bird, not the species, is coming back:

Next is an article for younger readers: 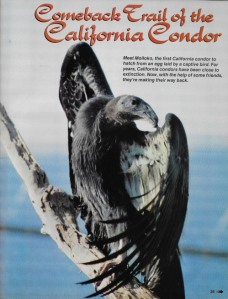 The bird making the comeback in this next item is not the condor but the brown pelican:

However, most of this newspaper article is about struggling species. Included is a photo of a newly hatched California condor and a note that the condor population is but 37.

A substantial article by 2 California condor experts is:

Here is a wide-ranging look at endangered species for younger readers:

While this article considers progress with bison, whitetail deer, and other species, the California condor is categorized as being in danger.

This next title refers to factors inhibiting and promoting the condor’s coming back:

A newspaper in condor country provides a thorough article with fine photos:

Finally, there is a new book for young readers that I have not yet seen. This is from the publisher’s Scientists in the Field series:

To see the cover of the issue of Birds International cited above, which includes an excellent photo of a California condor, see the post Cover birds: 1978–2011.

For more posts about California condors and our language for them (some of which dig deeper than this one), click the LANGUAGE button under POST TOPICS (somewhere on this screen, depending on your device).