This post is about a feature-length documentary film that was released in theaters in 1953. Of course, the film includes the California condor.

At some point I acquired a poster for this film:

Based on the poster’s appearance and condition, it could be original.

This is a closeup view of the California condor portion of the poster, showing a parent feeding a chick: 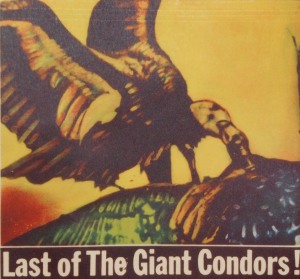 And here is a closeup view with the film’s credits:

I have yet to see this film so the rest of what I have to offer is based on newspapers and other sources. There is much interesting history here.

The Los Angeles Times for 6 July 1953 carried “Mankind Ignored in Wildlife Movie” by Ed Ainsworth. Here are excerpts from this provacatively-titled article:

Ed Harrison … who has spent the last 15 years taking color motion pictures of birds and animals as an amateur hobby has discovered that he is … an amateur no longer. He is too good.

A film organization heard about his work which had won him an interenational reputation as one of the foremost photographers of wildlife in America, and decided to put out a full-length film of his work.

“Song of the Land” is the title chosen for it….

Audiences will see not one fence, road, wire, vehicle, human footprint or house ….

Just a year ago in July, Harrison and his associates Henry Kesler and Ormond B. Ruthven began the colossal task of reducing 450,000 feet of film to 10,800….

“Song of the Land” … has been acquired for release by United Artists.

And on 8 November 1953, in the New York Times column “The Local Screen Scene”, A H Weiler wrote, in part:

Walt Disney … does not have a monopoly on movie nature studies…. “Song of the Land” employs no actors but features birds and other wildlife as well as their habitat….

The remaining newspaper reports are all from the Los Angeles Times.

One of the sequences features the authentic California condor, which no camera in color has ever caught before – and may not ever again due to their rapid extinction …

Just 5 days later, the newspaper carried an advertisement and short review. The display ad announced an “exclusive engagement” at the El Rey theater on Los Angeles’s Miracle Mile. Condors were not mentioned by name but 2 flying condors were shown. The ad’s text included:

This, then is the land – the land which seasons have piled into centuries, the centuries into eons, and the “Song of the Land” it is story … the startling story of a billion years!

“Song of the Land” is a valiant, if at times wearying effort … to dramatize Nature – that is, work the evolutionary forces in Nature into a story line.

It might have come off if the product had not been gummed up with a narration which often becomes a trifle banal.

However, in spite of its faults, “Song of the Land” has some startling pictorial passages which are reminiscent of the Walt Disney efforts of the past few years. The photography … is at all times skillful and sometimes brilliant.

The “plot” … hinges on a natural eruption of volcanic origin which drives animals, birds and fish into new areas to exist.

Through 1953’s holiday season, ads for “Song of the Land” appeared regularly in the Los Angeles Times. One common form of the ad highlighted the movie “The Captain’s Paradise” and noted that “Song of the Land” was the bill’s 2nd feature.

For historical context, other films advertised on the same page with “Song of the Land” included (on 07 December 1953):

“Walt Disney’s The Living Desert”
“The Conquest of Everest”

I was struck by the interest in nature and outdoor adventure represented by these latter 2 films.

Dorothy Townsend’s article “Businessman Fills 5 Museums for the Birds and the Scholars” was published in the Los Angeles Times on 28 July 1968. This profile of Ed N Harrison describes the private natural history museum he assembled and notes his role in creating “Song of the Land”.

To round out this post, I will quote from 2 currently-available sources. The Internet Movie Database summary of “Song of the Land” includes this:

The American Film Insitute indicates that an alternative title of “Song of the Land” is “Thunder from the Skies”. This resource also indicates that:

A significant ten-minute sequence is devoted to unique footage of the life cycle of the California Condor, an endangered species.

A television documentary about California condors aired the same year as “Song of the Land” was released. This documentary is described in the post A 1953 television show.

Just the year before “Song of the Land” was released, a romantic comedy involving the California condor arrived in theaters. This film is considered in the post Something for the Birds.