It’s time for some condor fun. Here are examples of games and toys that have a connection to the California condor or, at least, condors.

A standard deck of playing cards put a nice illustration of a California condor on the 7 of hearts (but I was a bit disappointed by the plain reverse side of the card): 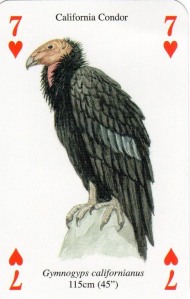 How about an educational card game called “Lord of the Wings”?

Here are the 2 sides of one of the cards: 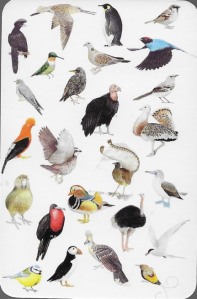 These are the 2 sides of a card from what must be an interesting game:

A game called or involving Bakugan includes a spherical playing piece named “El Condor” that’s not quite the diameter of a ping-pong ball:

Roll “El Condor” across a metal surface and it may pop open: 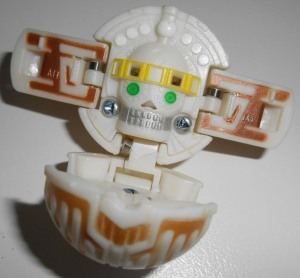 El Condor is a shaman-like Bakugan in a mysterious totem shape. It has amazing ability to fly, soaring like a giant Condor over its opponents in battle. El Condor can neutralize its enemies with a dazzling green laser beam.

This game also involves playing cards including one representing a different form of “El Condor”. Here are both sides: 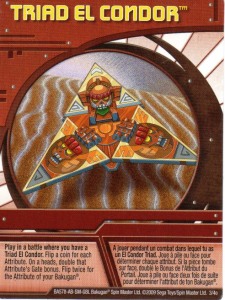 And, at last, a proper toy. This old tin steam engine bears a fine name: